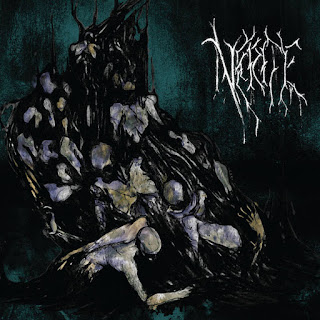 Necrite are a band from Northern California that plays a raw form of black metal with doom, drone, and ambient elements and this is a review of their 2010 album "Sic Gloria Transit" which will be released by Flenser Records.

Drums alternate between slow, mid paced to fast with a lot of brutal blast beats, while the bass playing follows the riffs that are coming out of the guitars and at times they sound very powerful with a lot of distortion being used, as for the synths and noise elements that bring a very dark ambient element to the music.

Rhythm guitars mix slow drone doom riffs with some fast black metal riffs that have a thrashy edge at times with some weird elements and distortion being added in on a lot of the songs and sometimes being dominant, and there are no lead guitars or solos present on this recording, as for the acoustic guitars when they are used briefly for a few seconds it adds another dark dimension to the music.

Vocals alternate between deep growls, high pitched black metal screams and suicidal cries as well as some chanting on the last song, while the lyrics cover misanthropy, urban decay and astral projection, as for the production it sounds very dark and raw which is the perfect mix for the ambient black metal this music creates.

In my opinion Necrite are a very good band that should appeal to fans of ambient black metal as well as fans of drone since they mix the 2 styles together. RECOMMENDED TRACKS INCLUDE "A Mass For The Harvest Of Death" and "Bathing Wounds With Open Shards Of Glass". RECOMMENDED BUY.

http://www.myspace.com/necrite
Posted by OccultBlackMetal at 2:33 PM