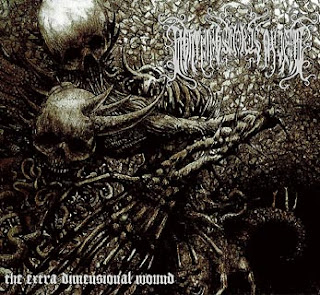 Lightning Swords Of Death are a band from Southern California that plays a brutal mixture of war, black, and thrash metal and this is a review of their 2010 album "The Extra Dimensional Wound" which was released by Metal Blade Records.

Drums range from slow, mid paced to fast playing with a lot of brutal blast beats, while the bass playing has a very strong sound the follows the riffing coming out of the guitars and at times they shred heavily on some songs.

Rhythm guitars mix speed and brutality together with riffs that mix the heaviest elements of war, black, death, and thrash metal together and some occasional slow riffing, and there are little to no guitar leads or solos present on this recording, as for the acoustic guitars when they are used it brings a very dark edge to the music with an instrumental.

Vocals are mostly high pitched black metal screams with a good amount of deep growls and thrash influenced vocals being thrown in, while the lyrics cover chaos and other themes that would be suitable for a death metal band, as for the production it sounds very professional with all of the musical instruments having a brutal sound.

In my opinion Lightning Swords Of Death are a very good band, and while I understand that some people might not give this group a chance because they are signed to a corporate label, I still feel this is a great and brutal war/black/death/thrash metal band and if you want something fast and brutal you will not be disappointed with this album. RECOMMENDED TRACKS INCLUDE "Nihilistic Stench" "Invoke The Desolate One" "Paths To Chaos". RECOMMENDED BUY.