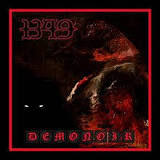 1349 are a band from Norway that is a very well known black metal band around the world and have also been interviewed by this zine and this is a review of their 2010 album "Demonoir" which was released by Prosthetic Records.

Drums are mostly fast with a lot of brutal blast beats mixed in with some slow to mid paced drumming, while the bass  playing which is kind of mixed down low in the mix has a dark tones with riffs that follow the guitars, as for the intro's they bring in avant garde effects to the music with only a small amount of synths being used on the last song.

Rhythm guitars are mostly fast black metal riffs with some slow and mid paced playing that also have a small amount of death metal and thrash influences, while the lead guitars are fast and melodic black metal guitar solos that utilize a lot of skill, as for the acoustic guitars when they are used they bring exotic scales and finger picking to the music.

Vocals are mostly high pitched black metal screams with some deep growls, clean singing vocals and spoken word passages, while the lyrics cover The Tunnels Of Set, the darker side of the Caballa, along with some other dark themes with the lyrics being written in both Norwegian and English, as for the production it is very professional sounding with all of the musical instruments having a brutal sound.

In my opinion this is another good album from 1349 and fans of this band will not be disappointed with the new album. RECOMMENDED TRACKS INCLUDE "Atomic Chapel" "The Devil Of The Deserts Of The Devil" and "Demoniar". RECOMMENDED BUY.

Posted by OccultBlackMetal at 1:53 PM