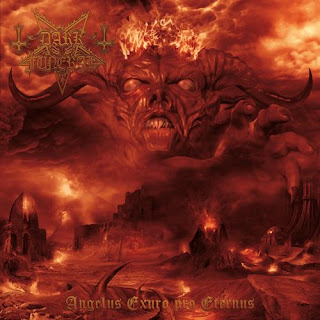 Dark Funeral are a band from Sweden that has been around since the early 90's and are a very well known black metal band worldwide and this is a review of their 2010 album "Angelus Exuro pro Eternus" which was released by Regain Records.

Drums are mostly fast playing with a lot of brutal blast beats being used at times with some slow to mid paced playing, while the bass  playing has a very dark and powerful tone that follows the riffs that are coming out of the guitars.

Rhythm guitars are mostly fast black metal riffs that have some dark melodies to them and some occasional slow to mid paced riffing, while the lead guitars are very skilled with some fast and melodic black metal guitar solos.

Vocals are mostly high pitched black metal screams with some deep growls being thrown in at times, while the lyrics cover Satanism, demons, vampirism, dying and hatred, as for the production on this recording it sounds very professional and you can hear all of the musical instruments on this album.

In my opinion this is another good Dark Funeral album and while some of the songs have a more slower vibe than previous album, I still feel that there fans will still get into this album. RECOMMENDED TRACKS INCLUDE "The Birth Of The Vampur" "My Funeral" "Demons Of Five" and "In My Dreams". RECOMMENDED BUY.

Posted by OccultBlackMetal at 10:33 PM