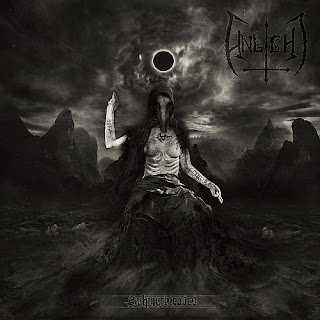 Unlight are a band from Germany that plays a very fast form of black metal with a thrash edge and this is a review of their 2010 album "Sulphurblooded" which was released by Massacre Records.

Drums range from slow,mid paced to fast drumming with a lot of brutal blast beats, while the bass playing has riffs that follow the guitars and at times they have a powerful sound of their own, as for the synths they are only used briefly and are only there to bring a dark atmosphere to the music.

Rhythm guitars are mostly slow, mid paced to fast Armageddon style black metal riffs that have a lot of thrash influences thrown in with some melodic parts, while the lead guitars are very skillful and combine thrash, death, and black metal in the solos with a small amount of melody being used at times, and there is a brief acoustic guitar used on the last song.

Vocals are mostly high pitched black metal screams with some deep growls being thrown in at times, while the lyrics cover hateful themes and black/thrash with some lyrics in German but mostly English, as for the production it has a very heavy and professional sound that makes the music sound very brutal.

In my opinion Unlight are a very good band that brings back the mid 90's to early 20's Swedish black metal sound with a lot of thrash influences, and if you are a fan of those kind of band's you  should check this group out. RECOMMENDED TRACKS INCLUDE "Sulpherblooded" "Pale Rider Pale Horse" "Become An Opponent" and "By The Seventh Seal A Black Thrash Symphony". RECOMMENDED BUY.

Posted by OccultBlackMetal at 2:06 PM