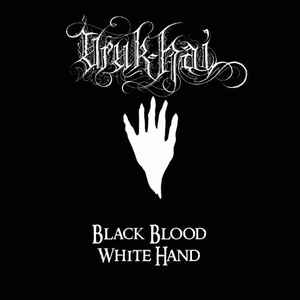 Urak-Hai are a band from Austria that plays a music style that I would describe as being epic/mystic black ambient/metal and this is a review of their 2009 album "Black Blood, White Hand" which was released by Sturmklang Records.

Drum programming is mostly slow nbeats that give the music a very heavy epic feel, while the synths have an atmospheric/ambient sound that makes the music sound very epical and mystical mixed in with alot of elements from avant garde noise music, as for the bass playing it is mixed down low in the music and seems to follow the riffs that are coming out of the guitars.

Rhythm guitars are mostly black metal riffs that range from slow to midpaced mixed in with some ambient influences that are powerful throughout the album and there are little to no lead guitars or solos present on this album, as for the accoustic guitars when they are used they use open shords and fingerpicking to bring back the feel of the dark ages of Mordor.

Vocals are mostly deep growls that sound more like pagan dark/black metal than death metal that also utilizes high pitched black metal screams that have an edge of the depressive sound with some whispered vocals being used at times mixed in with some clean singing vocals that bring a new age feel to the music ion addition to the spoken word passages that are very ritualistic, while the lyrics are heavily inspired by the writings of J.R.R. Tolkien with a heavy focus on nature, as for the production it sounds very dark and epic.

In my opinion Uruk-Hai are a very original band that should appeal to ambient black metal fans as well as fans of avantgarde dark/ambient since they mix these two styles together with much success and originality. RECOMMENDED TRACKS INCLUDE "The Fate Of Man" "Black Blood" "The Dark Lord" and "Tales from The Misty Mountains". RECOMMENDED BUY.

https://www.spirit-of-metal.com/en/band/Uruk-Hai_(AUT)
Posted by OccultBlackMetal at 5:59 PM