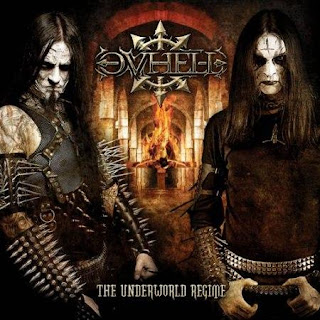 Ov Hell are a band from Norway that is a super group of sorts with members being from Gorgoroth, Dimmu Borgir, Enslaved, Satyricon and 1349 and they play a modern form of Norwegian black metal and this is a review of their 2010 album "The Underworld Regime" which was released by Prosethic Records.

Drums range from  mid paced to fast playing with a lot of brutal blast beats being thrown in, while the bass playing has a very dark tone and they play a mixture of mid paced to fast black metal riffs, as for the synths they are only used on the last song to enhance atmosphere..

Rhythm guitars are very professional sounding black metal riffs that range from slow, mid paced to fast mixed in with some thrash riffing and a little bit of melody, while the lead guitars utilize a lot of skill and melody in the guitar solos.

Vocals are all high pitched black metal screams with some tortured vocals and deep growls, while the lyrics cover Anti Christianity with a small dose of devil worship and other dark themes with the lyrics being written in a mixture of Norwegian and English, as for the production on this recording which was recorded at Earshot Studio during the months of October and November of 2009 sounds very professional and you can hear all of the instruments that are present on this recording.

In my opinion Ov Hell is a very good band and while some people might not check out this group due to some members playing in more commercial sounding bands and the production also not being raw, I still feel this is a good album and fans of Norwegian black metal will not be disappointed. RECOMMENDED TRACKS INCLUDE "Post Modern Sadist" "Invoker" and "Acts Of Sin". RECOMMENDED BUY.