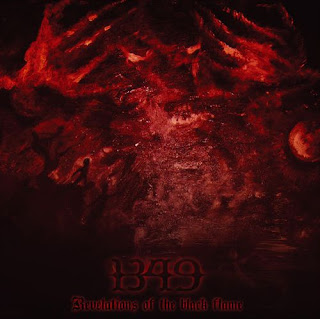 1349 are a very well known band in the black metal scene that has also been interviewed and had their new album by this zine and this is a review of their 2009 album "Revelations Of The Black Flame" which was released by Candlelight USA during the year of 2009.

Drums alternate between slow, mid paced to fast drumming with a lot of brutal blast beats being thrown in, while the bass playing has a very dark tone with riffs that follow the guitars and at times they have a very powerful sound of their own, as for the effects they being a dark avant garde feel to the music bringing in some occasional dark piano pieces.

Rhythm guitars alternate between slow, mid paced to fast black metal riffs with some death metal and thrash influences being thrown in the rhythm's along with some palm muting, while the lead guitars are very distorted and heavy sounding guitar solos, as for the acoustic guitars when they are utilized briefly brings some soft playing to the weird and heavy experimental music on this album.

Vocals are mostly high pitched black metal screams with some deep growls being thrown in at times, while the lyrics cover dark themes and some death type lyrics, as for the production on this recording which was recorded at Studio Studio Nyhagen under the full moon of December of 2008 and 2009 sounds very professional and you can hear all of the musical instruments that are present on this recording.

In my opinion this was an underrated album from 1349 and I remember when it came out some fans where calling it a sellout and I did not check out this album myself until a year later, but when I finally did I thought it was different than their previous releases but still a good experimental black metal album. RECOMMENDED TRACKS INCLUDE "Invocation" Serrpentine Sibilance" and "Maggot Fetus". RECOMMENDED BUY.

Posted by OccultBlackMetal at 10:07 PM