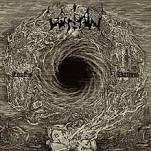 Watain are a band from Sweden that is very well known in the black metal circles that  plays a raw, melodic, satanic and occultic form of black metal and this is a review of their 2010 album "Lawless Darkness" which was released by Season Of Mist Records.

Drums cover a lot of ground with some slow, mid paced to fast playing with a lot of brutal blast beats, while the bass playing has a very dark tone and follows the riffs that are coming out of the guitars.

Rhythm guitars are mostly mid paced, slow to fast black metal riffs that combine heaviness and melody with a lot of catchy  parts and a thrash edge mixed in with a small amount of soft open string playing but done in a more distorted way, while the lead guitars are very melodic and dark sounding guitar solos that contain a lot of skill and talent along with a lot of distortion.

Vocals are mostly high pitched black metal screams that use a small amount of melody at times, while the lyrics cover Satanic, Luciferian, Sumerian and Cabbalistic themes, as for the production which was recorded at Necrmordus Studios during the first few months of 2010 it sounds very professional and all of the musical instruments have a very good and heavy sound to them.

In my opinion this is another great release from Watain and while some hardcore black metal fans have mixed reviews on this release I still this is a great album from them, since it is still very dark sounding. RECOMMENDED TRACKS INCLUDE "Reaping Death" "Four Thrones"Hymn To Qayin" and "Kiss Of Death". RECOMMENDED BUY.