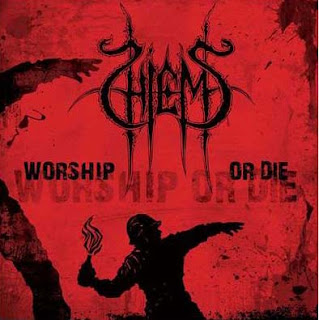 Hiems is a 1 man side project of Algol better known for his work with Forgotten Tomb and with this project he plays a modern form of black metal that has rock and psychedelic tendencies, and this is a review of their 2009 album "Worship Or Die" which was released by Moribund Records.

Drums range from slow, mid paced to fast drumming with a good amount of blast beats, while the synths have a very dark sound to them without overpowering the music and they bring in a 70's psychedelic edge on a couple of song, as for the bass playing it has a very dark and primal tone with riffs that follow the riffing of the guitars and at times sound very powerful and dominate through parts of the album.

Rhythm guitars mix raw and primal black metal riffs with some thrash, black rock and classic rock influences mixed in with a great amount of distortion to create a more modern black metal sound, while the lead guitars are very distorted sounding guitar solos mixed in with 70's rock influences on one song with some soft playing being used only briefly.

Vocals are mostly high pitched black metal screams with a small amount of cleaning as well as some spoken word passages and samples, while the lyrics cover hatred and disgust for the world with a philosophical bent, as for the production on this recording which was recorded and mixed from January to October 2008 at Elfo Studios in Piacenza, Italy sounds very professional and you can hear all of the musical instruments that are present on this recording.

In my opinion Hiems are a very talented and original sounding black metal band that uses a lot of distortion and bring in psychedelic elements which I am looking forward to see what they do with them on future releases, if you want an original sounding black metal band, check this group out. RECOMMENDED TRACKS INCLUDE "Worship Or Die" "Scum Destroyer" and "Wounds Just Death Can Heal". RECOMMENDED BUY.

Posted by OccultBlackMetal at 10:53 PM