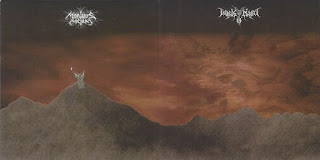 This is a review of a split album between Greece's Mortuus Caelum and Atlanta, Georgia's Winds Of Malice which was released by December's Ghost during the year of 2009 and we are going to star of the review with Mortuus Caelum that play a raw and occult form form of black metal.

Drums are a mixture of mid paced to fast drumming with a lot of brutal blast beats and some slow playing, while the bass playing has a powerful sound at times which follows the riffs that are coming out of the guitars.

Rhythm guitars alternate between slow, mid paced to fast raw black metal riffs that have a thrashy edge at times and there are little to no lead guitars or solos present on their songs.

Vocals are all high pitched black metal screams, while the lyrics cover Satanism, Ancient Stories, Hellas and Nature, as for the production on their songs which were recorded at Esoteron and Abyssal Studios during the months of December 2008 to January 2009 has the raw feel of a demo recording.

In my opinion Mortuus Caedum are a very good black metal band that has a very raw demo sound to their music and should appeal to fans of fast and brutal black metal. RECOMMENDED TRACKS INCLUDE "Fields Of Sacrifice" and "The Mysterious Shadow".

Next up is Winds Of Malice who play a very heavy form of black metal.

Drums alternate between slow to mid paced and fast drumming with a lot of brutal blast beats, while the bass playing is mixed down low in the mix and seem to follow the riffs that are coming out of the guitars.

Vocals are all high pitched black metal screams, while the lyrics cover Nietzscheanism, Darkness, Anti-Christianity, and Death, as for the production it has a very dark and evil sound to it.

In my opinion Winds Of Malice are a good band and while they are not the most original band that I have ever heard they make up for it by being very heavy and brutal. RECOMMENDED TRACKS INCLUDE "Arrival Of Infernal Winds" and "Walk Through These Woods.

In my opinion this is a very good split with Mortuus Caelum having the best music on this split. RECOMMENDED BUY.