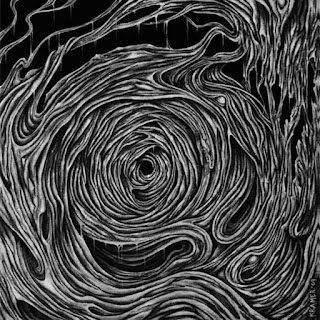 Legions Of Astaroth are a band from Georgia that plays a very occult form of black metal and this is a review of their 2009 album "Rites Of Somatic Death" which was released by Enucleation Records.

Drums are a mixture of mid paced to fast drumming with a lot of brutal blast beats and some occasional slow parts, while the synths are only used briefly and they bring a very dark and occultic sound to the music, while the bass playing has a very dark tone that is very easy to hear at times and dominates throughout the album.

Rhythm guitars alternate between slow, mid paced to fast black metal riffs that are very dark and occultic sounding with some soft playing being used briefly on one of their songs, while the lead guitars when they are used bring in a lot of darkness into the music and there is not much in the way of guitar solos.

Vocals are mostly high pitched black metal screams with some spoken word passages, while the lyrics go into Luciferian, Alchemy, Arcane and Occult style of topics, as for the production it has a professional but raw sound which captures all of the instruments and gives them a very good sound.

In my opinion this is a good album from Legions Of Astaroth and it sounds like that they have grown as musicians I have heard the split they did a few years back and seen them in concert and I can tell they have progressed a lot, if you like black metal that is very occultic but still fast and heavy, you should check out this album. RECOMMENDED TRACKS INCLUDE "Science Of Threefold Initiation" Nescience Congoined To Self" "Ritual Of Somatic Death" and "Cursed Unto An Ageless Dawn". RECOMMENDED BUY.

https://www.metal-archives.com/bands/Legions_of_Astaroth/22148
Posted by OccultBlackMetal at 10:21 AM