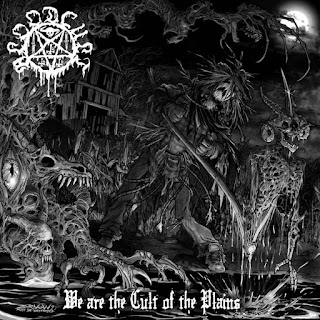 Blood Cult are a band from Illinois that plays an original form of redneck black metal that is still very raw sounding but with elements that no other black metal band has touched and they have also been interviewed by this zine, and this is a review of their 2010 album "We Are The Cult Of The Plains" which was released by Moribund Records.

Drums cover a lot of ground with some mid paced drumming that has a rock edge with some fast playing and brutal blast beats, while the bass playing has a very powerful tone that mixes black metal and rockabilly together with some bass  leads being used at times.

Rhythm guitars are very original with some raw black metal riffs that also mix in thrash, southern rock and rockabilly influences to create an original sound, while the lead guitars mix traditional metal with southern rock in the guitar solos.

Vocals are a mixture of high pitched black metal screams and clean singing vocals that are very southern sounding, while the lyrics cover Satanism and Necromancy from a Left Hand Path redneck point of view, as for the production it is very raw but professional sounding with all of the musical instruments having a good sound to them.

In my opinion Blood Cult are a very great band and if you want an original sounding black metal album, you should check out this band. RECOMMENDED TRACKS INCLUDE ""My Forest Home" "Devil's Sabbath" "Serpent" and "Necromance"> RECOMMENDED BUY.

Posted by OccultBlackMetal at 12:54 PM