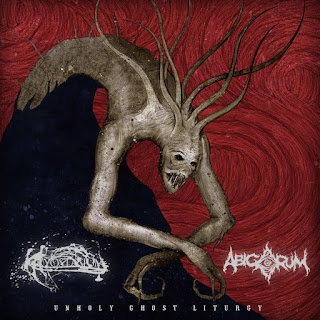 Abigorum  and  Cryostasium  creates  a  recording  that  takes  the  raw,  depressive  and  atmospheric  sides  of  black  metal  and  mixes  it  with  doom,  ambient,  experimental  and  psychedelia  to  create  a  very  original  style,  the  production  sounds  very  raw  yet  powerful  at  the  same  time  while  the  lyrics  cover  ghosts  and  paranormal  themes.

https://satanath.bandcamp.com/album/sat160-abigorum-cryostasium-unholy-ghost-liturgy-collaboration-2016
Posted by OccultBlackMetal at 8:46 PM