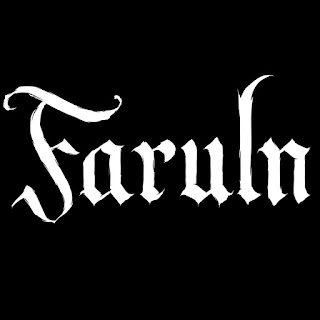 Faruln is my way of expressing myself musically. Nothing more, nothing less. It is the music and words that comes straight out of my heart.

2.In March you have a new ep coming out, musically how does it differ from your previous demo's?

Since the EP contains re-recorded songs from the demos it doesn't differ musically at all. The biggest difference is the drums which are performed by the talented D. Ekevärn and not programmed by me. Real drums really improved the songs to a great extent.

3.According to the Metal Archives page you refer to your music as 'neo Nordic Metal', can you tell us a little bit more about this term?

I sometimes have a problem with the label 'Black Metal'. What in my opinion should be a boundless genre is often constrained by some narrow minded fools. I came up with 'Neo Nordic Metal' because it felt more limitless. But I have stopped using that term now, hopefully the music can speak for itself.

4.What are some of the lyrical topics and subjects you have explored so far with the music?

I tend to write very personal lyrics. Almost diary-like I try to discuss topics regarding death and futility, misanthropy, rebellion, suffering and the left hand path.

5.What is the meaning and inspiration behind the name 'Faruln'?

Faruln means The Devil. The word comes from a dialect spoken in the northern parts of Sweden. I don't think further explanation is necessary.

It's an image of the trickster god Loki and his wife Sigyn. After the death of Baldur, Loki was fettered and placed under a snake that would spit venom onto his head. Sigyn sat by his side holding a bowl to protect him from the venom. When emptying the bowl some of the poison would fall on Lokis forehead, causing him severe agony, which in turn caused earthquakes.

I chose the image because I think it correlates very well with the title. How people choose to interpret the cover us up to them.

No, as mentioned the drums on the EP was recorded by D. Ekevärn. I do, however, prefer to work alone as much as possible. But it would be stupid of me not to get assistance and advice when I feel that my own abilities are not enough.

8.So far you have worked with 'Ekhidna Records and Battlesk'rs Production' on the physical formats of your recordings, do you feel both of these labels have been very helpful when it comes to getting your music out there heard?

Yes, I do. Both labels are real underground and driven by passion rather than the current trends.

Some people like it, some don't, I guess. No reviews yet.

10.When can we expect a full length and also where do you see yourself heading into as a musician in the future?

I would prefer not to record a full length and instead continue doing EP:s and singels. For the time being I enjoy those formats more. I will continue to write songs for Faruln and perform as live guitarist in Mortuus.

Scandinavian Black Metal will always have a special place in my heart. I listen to lots of different styles of music though. Polish Mgła and Kriegsmaschine are two of my latest discoveries within the black metal genre. Quality stuff.

I would like to thank you for your interest in Faruln.