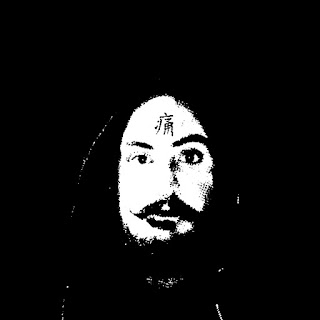 Serpent Moon arose mainly out of necessity. 2020 was a difficult year for everyone and I needed an outlet to cope. The seeds had been planted a long time ago, of course, but a slew of personal traumas throughout the year really inspired me to make it happen.

2.So far you have released 3 ep's, can you tell us a little bit more about the musical style that you went for on the recording?

I wanted to make something really ugly. I was going through a horrible period in my life and wanted to create something as disgusting as I felt at the time. I'm honestly not too sure how successful I was on that front. As the sound evolved I found my mind wandering into a more melodic place often throughout the recordings.

3.What are some of the lyrical topics and subjects you have explored so far with the music?

All of Serpent Moon's lyrics come from a deeply personal place.  I've written about relationships, mental health, mortality, that kind of stuff. I'm not out looking to say anything profound, rather to let go some demons and get those feelings across.

4.Your music also avoids the use of traditional guitars, can you tell us a little bit more about using the bass guitar as the main lead instrument on your recordings?

At the time of writing these songs, the guitar just wasn't really exciting me the way it used to.  I've been playing guitar for fifteen years and I just wanted to focus on a different medium.  I think the piano and bass combo has lent itself the feeling of the songs really well.  I'm not ruling out incorporating the guitar into Serpent Moon's music in the future, but I can say I miss it right now.

5.What is the meaning and inspiration behind the name 'Serpent Moon'?

The idea of snakes shedding their skin and the moon going through its cycle is really comforting to me.  The idea of rebirth. I guess it's kind of a hopeful positive to counterbalance the negativity in the songs themselves.

6.Can you tell us a little bit more about the artwork that is presented on the compilation cover?

The image to me is very lonely. There's a strong  sense of isolation I get from looking at it.  I felt like it matched the sound I was putting out pretty well.

I've become pretty accustomed to working solo, but I never say never. I would absolutely love to put together a live group, if we ever get things back to normal, that is.

8.Recently you have released all 3 of your ep's on a single album, can you tell us a little bit more about the decision behind releasing a compilation?

I prefer the idea of a full length album, but I find myself getting a bit impatient while the songs come together. Releasing the album in chunks and then compiling it all together made things a little smoother for me mentally.

9.Currently you are unsigned, are you looking for a label or have received any interest?

I haven't had any takers yet, but I'm open to the idea and have sent out a few feelers.

10.On a worldwide level how has the reaction been to your music by fans of depressive black, sludge and funeral doom metal?

Reactions have been really great. I wasn't sure that this was going to be something that anyone but me was ever going to hear. Knowing that people are listening and enjoying it is pretty overwhelming.

11.When can we expect a full length and also where do you see yourself heading into as a musician during the future?

I think a full length is on the horizon, but I want to do it right.  When it chimes it will be a cohesive piece of music and not a collection of songs.

Kanamishi and Mournful Congregation are two bands without whom Serpent Moon wouldn't exist. Those are huge influences on the concept. My musical taste is a little all over the place but I've mostly been catching up on some classic black metal lately.

I'd just like to thank everyone who listened to the EPs or has preordered the compilation so far.  It really means a lot to me that others are connecting to the music the way I did.

Posted by OccultBlackMetal at 9:11 PM