Valdaudr is a two-piece black metal band started in 2020. However, the members have roots in the black metal scene since 1993 and Død played in Satyricon between 1996-1999. Valdaudr is the continuation of Cobolt 60, which was a black metal band for almost 20 years between Død and original singer of Blood Red Throne until recently.

2. You have a new album coming out in February, can you tell us a little bit more about the musical style that you went for on the recording?

Pure organic and old-school black metal. This is how we like that genre and we didn't have to force anything. I really like the albums being released in the mid 90's and wanted to make an album sounding like that. I guess there is some thrash metal too and even some folk partsto make it even more interesting.

3. The band is considered as being a continuation of 'Cobolt 60', how does your newer music differ from the stuff you had released under your old name?

Many of the songs and riffs were written and recorded many years ago and they were all meant to be on the 3rd Cobolt 60 album. What is different though are the vocals. Vald has more intense screaming vocals and he also has some epic clean vocal parts. We also brought in Rune Nesse(Taake, Orkan) and he definitely has his signature on the drums.

4. What are some of the lyrical topics and subjects you explore with the newer music and also how would you describe your progress as songwriters over the years?

The lyrics are mostly inspired by many of the gruesome stories in the bible. There's also some norse subjects. It's basically anti-religious lyrics. Regarding songwriting, this has become a real focus for me the last decade. I used to make a ton of riffs and just put them together. Now, I'm really working on the arrangements and flow of the songs.

5. What is the meaning and inspiration behind the name 'Valdaudr'?

My artist name is Død, meaning Death in english. Daudr is an old norse twist of the same word. Vald is Osvald's artist name. It means power or force. So, something like The Power of Death. I just thought Valdaudr was perfect since this is our two-piece project and somewhat cool to have a norwegian/norse name to it since all lyrics are in norwegian.

6. Can you tell us a little bit more about the artwork that is presented on the new album cover?

Keep it simple and old-school. We had a great photo-shoot in the norse woods somewhere close to Vald's home. The album is called Drapsdalen(The Valley of Murder), inspired by a certain valley in the old testament where god helped killing thousands of people. This figure on the front cover with the axe symbolizes this act of holy killing.

7. Currently there are only 2 members in the band, are you open to expanding the line up or do you prefer to remain a duo?

Hard to say. If we find the perfect drummer and person, we might make it a trio. No more people than that. My other bands have 5 members, so it's nice to keep it a duo in Valdaudr!

8. Both of the band members have a history playing in extreme metal bands for the past 20 or more years, what is it that motivates you to keep going after a couple of decades?

I have a passion for music. Whether it's extreme or not. I guess this is why I have 5 bands/projects. It's not something I just stop. I'm inspired and creative still and want to make good music for many years to come!

The album is not out yet, but based on the first single we released, this is something fans of black metal would find hard not to like. If you miss the old-school vibe of this genre, look no further.

I have 4 albums coming out these next months, so I'm pretty active, haha. I guess the most interesting would be the 10th Blood Red Throne album being released soon. That's a massive one this time. Also, when the world opens up, Vald is playing live-bass in Blot. A great viking/black metal band from our region.

I have no intention in changing dramatically. I stick to the style in every band I play in. I have some riffs for the next Valdaudr album and it will be grim and necro. There's no other way!

12. What are some of the bands or musical styles that have had an influence on your music and also what are you listening to nowadays?

In Valdaudr it's definitely the black metal I listened to in the early 90's and still do. This is how I like black metal. Old Darkthrone, Gehenna and Dissection. I'm also a big fan of epic black/pagan metal as Primordial and Enslaved.

Fans of old-school and classic black metal should check out Valdaudr. You will not be disappointed. Album out on vinyl/CD February 26th on Soulseller Records. Hail! 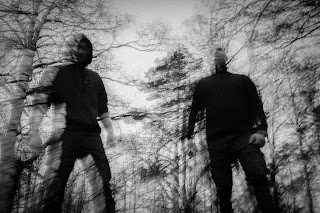 https://www.facebook.com/valdaudr
Posted by OccultBlackMetal at 6:10 PM