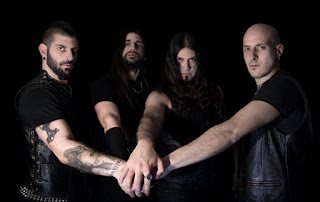 1.Can you give us an update on what has been going on with the band since the recording and release of the new album?
Right now we are concetrate for the promotion of the Athanati album.
We will release 3-4 videoclips and we will send promo to all major magazines and webzines.Ofcourse we will also  be prepared for live shows.

2.Recently you have released a new album, how would you describe the musical sound that is presented on the recording and also how does it differ from the stuf you have released in the past?
The music style is not strictly black/death metal.We have a lot of influences and we don't want to limit our self in one genre.The old stuff back in 1997 it was more raw black metal and  with other line up.

3.The band was broken up for a few years, what was the cause of the split and also the decision to reform?
We were focus only with Astarte it was our priority.We have never split we were just inactive.The cause of reacitvate was the need to perform live our material.It is always great to communicate with the fans.

5.What is the meaning and inspirtion behind the name 'Lloth'?
The Lloth was created by Tristessa of Astarte back in 1995 after they were renamed as Astarte.The members were all females so they choose Lloth as the name of the band ,the mythic  Spider Queen from Dungeons and Dragons.

6.What are some of the best shows that the band has played over the years and also how would you describe your stage performance?
We have few lives from 2004 with Rotting Christ,Inveracity.More recent with Septicflesh,Kawir.At Astarte Fest we had honour Maria 'Tristessa'Kolokouri and we share the stage with alot of excellent Hellenic bands.

7.Do you have any touring or show plans for the new album?
We want to promote first our Album Athanati and later to organize a lot of lives for the same reason.It is in our plans.

8.On a worldwide level how has the feedback been to your newer music by fans of black and death metal?
We have a lot of positive feedback but we need to work hard to take our place in the metal scene.

9.What is going on with some of the other bands or musical projects these days that some of the band members are a part of?
As it concerns me as Nicolas Maiis i am involved to some projects like Pan Satyros in a folk-pagan style,Lycons which is a gothic/dark wave band and is also member Panthimis the bass player of Lloth.Insected is an old band of mine .We play melodic death/thrash with a lot of heavy elements and Setesh the guitarist with his black metal band Diablery and also guitarist at Insected.

10.Where do you see the band heading into musically during the future?
I think more into black metal and less to death metal style.I want to use multiple clean voices to give something more epic to our music.

11.What are some of the bands or musical styles that have had an influence on your newer music and also what are you listening to nowadays?
Personally i am fan of 90's for the extreme metal but i am trying to have my own style in music.As about my music preferences they depend from my mood from Bolt Thrower till Sisters of Mercy and Exploited.Music has no boundaries.

12.How would you describe your views on Paganism?
I think everybody can believe whatever he wants.I respect our ancient culture and civilization.Arts and spirit is our legacy.

13.Before we wrap up this interview, do you have any final words or thoughts?
I want to thank all the fans that supports us from the beggining ,It was a hard proccess to make this record but we feel satisfied for the result.

Posted by OccultBlackMetal at 4:54 PM