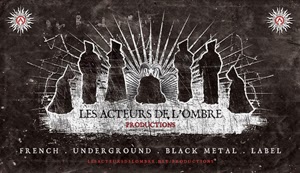 1.Can you give us an update on what has been going on with the musical project since the recording and release of the new album?
“El Viaje Definitivo” was released 2 weeks ago by Emanations, but it was actually recorded in 2013. In the first place the album was supposed to be released by a Canadian label, but the label owner changed his mind after sending the contract… that was really weird. This whole thing wasted about 1 year of my time, and explains why it took so long to be released. But now I am glad Emanations handles this, because I know they are dedicated to their bands and 100% reliable.

2.Recently you have released a new album, how would you describe the musical sound that is presented on the recording and also how does it differ from the stuff you have released in the past?
Grossly, I would describe it as “unorthodox black metal”. The music sounds like black metal and a few other things, but the lyrics are not about Satanism at all. Musically, this latest album probably focuses more on the melodic aspects than the first 2 releases.

3.What are some of the lyrical topics and subjects you explore with the newer music?
Every release focuses on one or several “themes”, all related to spirituality in general and human passions in particular. The first album was about religion, the tracks from the split with INSSECT were about drugs and perception, and this new album is about magic and shamanism in non-occidental cultures.

4.What is the meaning and inspiration behind the name 'Profundae Libidines'?
The name was taken from a Cicero excerpt. It could be translated by “The Pit of Passions” and refers to the endless depth of human passions. Every Passion is a good opportunity to ask questions and Profundae Libidines is all about asking questions and laughing at the answers.

5.The current album was the first one to be released in 3 years, can you tell us a little bit more about what has been going on during that time period?
As I said, I had issues with the label I had signed with, so I wasted a lot of time. To be honest, I also have older material that is not released yet which I want to rework before; a drummer friend of mine was interested in recording the drums for this future release, so we don’t have this crappy electronic drum sound anymore.

6.Currently there are only 2 members in the band, are you planning on expanding the line up in the future or do you chose to remain a duo?
I don’t know who you refer as a second member, because I have always been the only permanent member. I am not planning to change this yet unless I decide to try to setup a real lineup, which is not likely to happen for many reasons.

7.On a worldwide level how has the feedback been to your music by fans of black metal?
I guess most of them have never heard of Profundae Libidines. And among the ones who actually listened to the first album, there was a lot of misunderstanding because the lyrics were taken from the gospels which lead some people to think the band was christian. The second release was a split tape, so I guess very few people listened to it.

8.Where do you see the band heading into musically during the future?
Before starting composing and recording stuff, I never know where I am actually heading into. But since it is already recorded, I can tell you the next album will sound a bit different: with very little distortion and lyrics in old French.

9.What are some of the bands or musical styles that have had an influence on your newer music and also what are you listening to nowadays?
I think Castaneda is the most obvious influence of PL, because some of the lyrics directly refer to his works. Otherwise I cannot really say if any bands/styles had influence on PL music. Probably not directly. Recently I have been listening a lot to Urfaust and Varsovie. You probably already know Urfaust if you’re into atmospheric black metal, but please check Varsovie: this post punk band is really amazing, especially the lyrics.

10.What is going on with some of the other bands or musical projects these days that some of the band members are a part of?
I am currently involved as a bass player in Eros Necropsique (goth music) and Tales of Blood (old school death metal). Both bands had gig(s) last year and Tales of Blood is working on a new album.

11.Does Occultism play any role in your music?
If you refer to occultism as a practical way of understanding or even interacting with the mysteries of the universe, then NO. I may use occultism (in my case: shamanism), but only as an illustration of the weirdness of all things.

12.What are some of your non musical interests?
My first interest is my wife and my daughter. Otherwise I am interested in reading, politics and in 1 video game (yes, only one of them).

13.Before we wrap up this interview, do you have nay final words or thoughts?
If you’re interested in listening to Profundae Libidines, please note the tracks are released under a creative commons license which allow you to copy them legally. Everything can be downloaded at http://profundae.libidines.free.fr/.
Thanks for your review and interview!

Posted by OccultBlackMetal at 1:03 AM