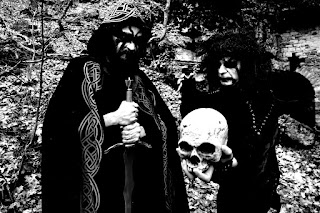 Although Bekmork are new to the black metal scene it is our goal to deliver a sound reminiscent of second wave black metal, as was produced in Norway and Scandinavia during the early to mid 1990s.

2.You have your first album coming out during the beginning of 2019, can you tell us a little bit more about the musical style you went for on the recording?

Bekmork is making music in the spirit of Norwegian black metal, which is to say utilizing the style, concepts and inspiration which originated from Bergen and Oslo, back in the formative days of the genre.  During that time period following the the primordial stages of black metal from the continent, such as Venom and Celtic Frost, and into that period which really codified and grew the genre in Scandanavia with bands such as Darkthrone, Mayhem, and Emperor.

3.You refer to your music as being 'true arctic black metal, can you tell us a little bit more about this term?

This is meant to invoke in the listener images of frozen landscapes and cold, harsh environments.  I think one of the strengths of those early Norwegian bands, is how their music made the listener feel transported to the arctic circle, a place of vast stillness and death.  This is to direct listeners to our sonic origins much more than being specific to a physical place.  Phrases such as "Norwegian" or "Arctic" Black metal are as much a genre, as they are a point of origin.  Lyrically, sonically, aesthetically and atmospherically, the album was strongly influenced by my time in Norway, although not entirely by any stretch.  We were trying to capture the sound from a frigid place.  But that frozen place can be Norway, or Antarctica, or Canada, or Hoth for that matter.  We are playing in the spirit of Norway, but that spirit need not be specific to Norway.  It can be found anywhere that is icy and dark.

4.Your lyrics deal with Scandinavian lore and Paganism, can you tell us a little bit more about your interest in this subject?

"Six Daggers, One Axe" is the story of a Viking king betrayed by jealous Chieftains whose lust for gold overcomes their oath of fealty.  "When Loki Calls" mentions several names from the Norse pantheon and their unique interaction with the author.  "The Bells of Klippe Hule (Summon Forth the Mighty Wakon) is not of Scandinavian origin at all, but rather involves Osage legends regarding cave sprits.  There isn't a single ideological view for Bekmork, as is common in black metal, but rather a cacophony of different ideas all directed into a specific musical style.

5.What is the meaning and inspiration behind the name 'Bekmork'?

Bekmork is Norwegian for "pitch dark or pitch black".  We were quite surprised and pleased to discover this name had not already been taken.

The cover photograph was taken at the entrance to a cave near where the album was recorded.  Although the park where this cave is located is a beautiful area, it also has a dark history of tragedy.  There have been suicides, accidental deaths and even murders committed in the immediate vicinity of the cave.  In ancient times this same cave was believed to be the home of the Wakon spirit.  These factors; the beauty, the tragedy, the darkness and an ancient legend make this place the perfect site for the vibe we were trying to create with the album.  The other photographs in the album were taken during my time in Norway in places such as Bergen and Oslo.  These were chosen to invoke the sonic legacy we were trying to capture and hopefully build upon.

7.Currently there are only 2 members in the band, are you open to expanding your line up or do you prefer to remain a duo?

"Incantations of the Frigid North" was conceived as a studio album.  The two of us played all the instruments, which would of course be impossible in a live setting.  If we were to present this album as a live show, we would have to recruit additional musicians.  There are currently no immediate plans to expand this to a live project, but it is possible.

8.The album is going to be released on 'Horns High Records', can you tell us a little bit more about this label?  Horns High Records is a locally based label, with very few bands, designed to help metal bands distribute music.

It is very early in the process, so reaction has been limited thus far, but encouraging.  We have had a few very good reviews.  It is nice to hear someone understand what we were trying to accomplish.   Russian black metal band Wintaar, has reached out to us to discuss collaborating on a future split.  We were very happy to know we had the interest of our peers in the scene.

We are hoping to get back into the studio in 2019, and are interested in collaborating with Wintaar on a split.  In the meantime, we hope "Incantations of the Frigid North" finds an audience.

There are three albums which I would consider to be the primary influence for Bekmork.  These are Darkthrone "A Blaze in the Northern Sky",  Mayhem "De Mysteriis Dom Sathanus" and Emperor "In the Nightside Eclipse".   These are, of course, the seminal albums in the genre, but this was the idea, to source from the classics.  We also listen to Immortal, Dimmu Borgir, Watain, Children of Bodom, Behemoth, Inquisition and Gorgoroth.  I especially like the Abbath solo album released last year.  We love all metal though, not just black metal, so our interests and influences exist beyond the subgenre as well.

Bekmork would like to thank OccultBlackMetalZine for taking an interest in the band, and for all you do to promote and grow metal music.  We hope any audience we find understands we approach this music with a deep reverence, and our aim was to contribute to the vast tapestry of black metal.  Hopefully, our listeners will enjoy listening to it as much as we enjoyed creating it.

Posted by OccultBlackMetal at 5:21 PM