1.Can you give us an update on what has been going on with the band since the recording of the new album?
After the recording of “Ichor” we started to work on new material already. The writing process can take several months and since we still do the recordings ourselves we have the luxury to work on the material whenever we want. Thronum Vrondor was put on hold for several years, but is now fully active again.

2.You have a new album coming out in 2019, musically how does it differ from the stuff you have released in the past?

Both our drummer Crygh and myself evolved on a personal level which led to a much more mature album than the first two albums. Especially the songwriting is much more balanced. Also we added SvN to our lineup and his vocal intensity marks the entire album.

3.This is your first album in 10 years, can you tell us a little bit more about what has been going on during that time span?

Well, after the recording of the second album “Vrondor II: Conducting The Orchestra of Evil”, we started writing some new material. However, we were not satisfied with the result and simply put the band on hold for about 6 years. When we saw that we found the feeling and mindset again to focus on Thronum Vrondor, we started to write all new material and began working on the new album. It proved to be a good decision to reactivate because after a few months we already had a framework of the new album. SvN, who not only does the vocals, but also the recording and mixing part, then took some time to focus on these aspects.

4.What are some of the lyrical topics and subjects the band explores with the newer album?


The lyrics are a fictional story inspired by Dante's Inferno and the old and new testament.
All lyrics tell one story. Humanity is starting a war with the gods. They feel they don't need them anymore and feel superior.
The gods don't see it that way and fight back to punish this insult.

5.What is the meaning and inspiration behind the name 'Thronum Vrondor'?

After playing in several bands before Thronum Vrondor, I wanted to get full control on the musical and artistical direction and started my own one-man’s project which I called Thronum Vrondor, or translated as “Vrondor’s Throne”. The one-man aspect however was not a wise decision and Crygh joined on drums and vocals immediately.

We leave it to the listener that takes the time to read the lyrics.

As i mentioned above, the lyrics tell a story. A lot of references are in the artwork.

Well so far we have not played any live shows. Thronum Vrondor is not a live band and if we would consider this, we would need to appeal on additional live session musicians to present our music. Furthermore Crygh is a maniacal perfectionist, and would only want to perform live when all auditive circumstances are perfect, which is of course not always the case when performing live. Never say never though, so we will see what happens in the future.

Although the album will only be released beginning of February 2019, we already received a lot of positive reactions on the returning of Thronum Vrondor.

The first two albums were well received and distributed in the entire world, and many underground black metal adapts have not forgotten these albums. Thronum Vrondor operates in the niche of black metal which forges the typical cold rawness of the riffing into an intense listening experience and we are convinced that “Ichor” will continue this path.

SvN is active in Dodengod. Who just released their debut album 'Salvation'.

He did the vocals, keys and recording for that album. And he is also working on a martial industrial project.

We feel that we are artistically on the same level with our stable line up and we will continue to develop the Thronum Vrondor sound, where intelligent black metal will always be the basis.

The musical style is a combination of all influences I have both in music and personal development, and it is hard to name bands that directly influenced the writing style of our music especially since the new album was more influenced by its predecessors than by external bands.

Bands which I listen to might however unconsciously influence the style, and in that respect I follow more traditional bands like Sargeist & MGLA, but I also deeply appreciate both the French scene with bands like Sühnopfer &  Aorlhac or the Quebéc scene with Forteresse and Monarque.

Be sure to check out the new album, it is the beginning of a whole new Thronum Vrondor era !! 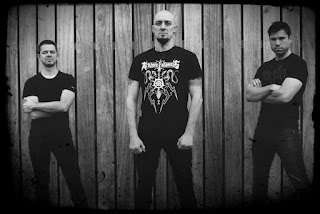 Posted by OccultBlackMetal at 9:19 PM