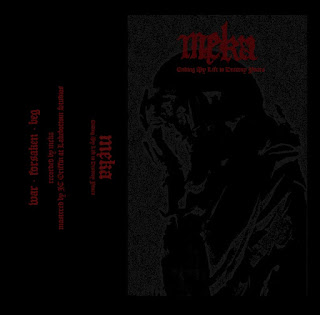 1.For those that have never heard of you before, can you tell us a little bit about the band? ⁃

We initially started Męka as a recording project for fun with no intention of playing out too much. This band is more fun than we all anticipated though so we’re just rolling with whatever happens. Męka is made up by Drew Arnold- Guitar, Jimmy Smolenski- Bass, Ronnie Farris- Drums, and Eli Fakes- Guitar/ Vocals.

2.In February you have an ep coming out, can you tell us a little bit more about the musical style you went for on the recording?
⁃ We didn’t necessarily have a specific sound we were going for other then heavy, fast, and pissed. The first day we got together Drew had a few riffs that we all loved and we just fucked with them until they turned into War and Forsaken.

3.What are some of the lyrical topics and subjects the band explores with the music? ⁃

More or less just being fed up with everyone/ everything and dealing with it. We wanted the songs to sound as pissed and evil as possible and death is an easy subject.

4.What is the meaning and inspiration behind the name 'Meka'? ⁃
“Męka” means torture in Polish.

5.Can you tell us a little bit more about the artwork that is presented on the ep cover? ⁃
The art is just cool photo of a mummy. There’s not really much depth in the artwork. Life sucks, everyone dies, mummies are cool. “Why would anyone put a mummy in a museum?!”- Kevin Malone

6.So far very little is known about the band with no social networks or information to be found online other than sharing a member with 'Mutilrated', is this intentional for the time being?
⁃ For the time being, yeah. We haven’t expressed much desire to create social network platforms because this band is more about the music itself but maybe someday. Drew and Eli are actually both now active members of Mutilatred. Eli has been a part of Mutilatred for the past 3 or so years and Drew has been touring/ playing in the band for the last year or so, he’s a great fucking guitar player and is a perfect fit for Mutilatred.

7.What are some of the best shows that the band has played so far and also how would you describe your stage performance?
⁃ We’ve only played three shows so far. Our first show was with our friends in Pains from Wisconsin (listen to them if you’re unfamiliar). Our second show was one we picked up when Jimmy and Ronnie’s other band React was unable to play, that show was with Freedom out of Detroit and a few other Ohio locals. Our third was Halloween party in our friends basement with Drew’s other band Outside. All fun shows. We just all get very into what we’re playing and have fun with it.

8.Do you have any touring or show plans once the ep is released?
⁃ The only thing we have booked currently is in April 4th at the Sanctuary in Detroit with Wake, Uncle Ray and a few others.

9.On a worldwide level how has the reaction been to your music by fans of black and death metal?
⁃ Honestly we don’t really know or care haha. This band is for us. If you like it then awesome, if you don’t then awesome.

10.When can we expect a full length and also where do you see the band heading into musically during the future?
⁃ We’ve got some new material in the works and have been talking about releasing a full length after “Ending My Life to Destroy Yours” but that might take a little time seeing as we’re all working full time and in other active bands.

11.What are some of the bands or musical styles that have had an influence on your music and also what are you listening to?
⁃ Weed and metal.

12.Before we wrap up this interview, do you have any final words or thoughts?
⁃ Nothing much else on this end! Enjoy the album. We’d like to give a huge thank you to Redefining Darkness Records for helping us release these songs, Thomas is a great dude and is constantly working with awesome bands. Thanks for having us -Męka

Posted by OccultBlackMetal at 8:58 PM