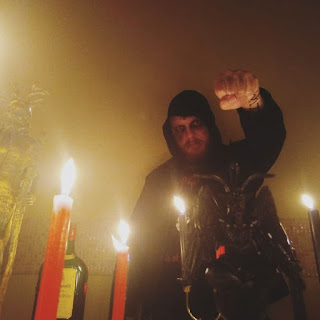 1.For those that have never heard of you before, can you tell us a little bit about the musical project?
Answer: the project is more a catalyzer of occult knowledge and magick ritual than anything.
Music is somehow secondary, is just a way I found to spread my knowledge and beliefs.

2.So far you have released a demo and single, musically how do they differ from each other?
Answer: not much in fact, the song The Call Of The Nameless God was composed at the same time of the other songs, but I didn't use it in the demo because I thought It would be too much.
The probably the biggest difference is the lyric is older, IV years ago or something like this. It was composed for a band called Inhumane Rites I used to play in. But, as you can see, it ended up in Promethean Gate.

3.Your lyrics cover a lot of occult and left hand path themes, can you tell us a little bit more about your interest in the dark arts?
Answer: I'd avoid this kind of subject, knowledge is something to be conquered, not freely given.
But, some writers that has guided me are: Thomas Karlsson, Adriano Camargo and Helena Blavatsky.

4.You also have some lyrics that are inspired by literature, can you tell us a little bit more about the literature that has an influence on your songwriting?
Answer: This one yes, horror books and films fascinated me since young age. The mysteries of fear and death are so connected to our subconscious that bringing this to Black Metal, and my music, was just an extension of everything.
For the first music themed after a book, The Tales of Modern Prometheus, it was done after I finished Frankenstein ( I dont know how many times I read it), the main point was to do a parameter between Victor Frankenstein and Prometheus from the greek mythology (and of course, Luciferianism).

5.What is the meaning and inspiration behind the name 'Promethean Gate'?
Answer: The inspiration was to set something using my alias Prometheus, and show the project was a continuation of myself.
Now, the meaning behind Prometheus is something that goes beyond. The one who brought fire to mankind is someone to celebrated.

6.Can you tell us a little bit more about the artwork that is presented on the ep cover?
Answer: The Ourobouros was to shown the path has no beginning and neither an end.
The Goat Of Mendes is an old medieval deity, the connection to it is the third song of the demo, Architecture and Concepts of The New God.

7.With this project you record everything by yourself but have experience playing with other bands, which one do you prefer?
Answer: Do it all by myself, without any regrets.

8.The demo was also released on 'Depressive Illusions Records', do you feel honored working with this legendary label?
Answer: Yes, I always love Moloch music and have this release in Europe is something very nice. Aldo, Sergiy was always a nice guy with me.

9.On a worldwide level how has the reaction been to your music by fans of black metal?
Answer: I really try to avoid some exposition and reading too many things of it. The Idea is to not let anything somehow change my perception of what I want to accomplish.
But I can say is, the Kiss fans hated the cover from the depth of their hearts.

10.When can we expect a full length and also where do you see yourself heading into as a musician in the future?
Answer: Two splits will be released this semester. One with the might Deviator from Ukraine and the other with the unfame Morpherus from Brazil. There's a chance for a third release this year, but I'm not sure.
About a Full-Length, probably next year with an Ukranian label, but nothing is set.

11.What are some of the bands or musical styles that have had an influence on your music and also what are you listening to nowadays?
Answer: To set the tone for Promethean Gate music, I brought something from old Norwegian Black Metal as Emperor and something from Hellenic bands as Acherontas and Kawir. Of course other bands influenced as Walsung (Brazil), Cult of Fire (Czech Republic), Cultes des Ghoules (Poland) and Nightbringer (USA).
Nowadays I'm listening a lot of Acherontas, Bölzer, Mephorash and something outside metal, as American Funk music.

12.Before we wrap up this interview, do you have any final words or thoughts?
Answer: I just would like to thank you Loki for the opportunity and the patience with my delay.
Also, for those who really follow the left handed path and Luciferian words and wants to improve knowledge and to expand your connections, sent us a message. The true luciferians should stay united.
Thank you.

Posted by OccultBlackMetal at 8:41 PM