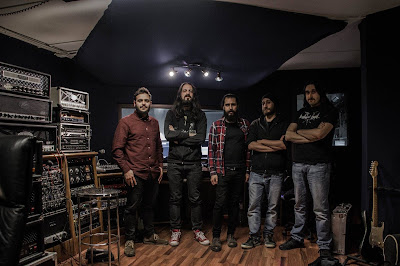 The recordings ended at the end of 2017, while the album was released a few days ago, now we spend a lot of time in the rehearsal room, we are preparing some concerts, the first of which will be the official presentation of the new album.

This new album, like the previous ones, has a sound based on the atmosphere and on the rhythm that punctuates it, but compared to the past there are more musical influences ranging from post metal to prog rock. In this album we decided to use only tube amplifiers and analog effects, I think this makes our sound truer and closer to our live performance.

3.Originally the band played in more of a black metal direction but over the years have added in more post and doom metal influences, what was the decision behind going into this musical direction?

Ours was not a decision, the evolution of our sound was natural and spontaneous, it is matured together with us and our influences. We play what we want to play, without thinking too much about definitions.

The concept of this album is the cosmos, we have imagined the cosmos as a living organism that breathes and completes its cycle of life, from birth to death, to start this cycle from the beginning in an endless whirl of long cosmic breaths

5.A lot of your lyrics have an existential and quantum science theme to them, can you tell us a little bit more about your interest in these topics?

Trying to understand the cosmos and its laws is something that has always fascinated humanity, we are no exception. Stephen Hawking's theories were very fascinating to us, so we decided to take a cue from them and create our own vision of things.

6.You also cover spirituality, sacred geometry and occultism, how would you describe your interest in the esoteric arts?

7.What is the meaning and inspiration behind the name 'Deadly Carnage'?

This name was decided many years ago, when the band's sound was very different from now. However, it was inspired by a famous Italian book of 1800 that in one of its chapters tells the plague that struck the city of Milan in 1600.

One of our best performances is very recent, last summer we played at an outdoor festival organized by our label. The stage was mounted in the heart of nature, in a forest of the Italian Alps, we played at sunset, a beautiful concert. Our concerts are designed as a journey, we do not pause between the tracks, we play the whole concert as if it were a single long track and behind us a film is projected that transports the viewer into our visual dimension. For us music and images are connected and with a legally indissoluble.

9.Do you have any touring or show plans for the new album?

For the moment we have not scheduled a tour, but some dates in our country to promote the new album, however we hope to be able to organize a European tour very soon.

10.On a worldwide level how has the feedback been to your newer music by fans of black. doom and post metal?

This new album is receiving excellent feedback both in our country and outside Europe, we are very pleased that our mix of genres is understood and appreciated.

Me and all the other members of the band are part of or have been part of several musical projects, but at the moment some of these projects are still. Currently among the active ones there are Omega, which can be defined as a parallel project of the Deadly Carnage with which we explore our darker side, then are active solo projects of Dave and Alexios or respectively Wear and Tear and Tha Goblunz March, the first has a sound close to Almbient and experimental electronic music, the second one is crazy and very theatrical folk metal.

It is impossible to really predict what we will do in the near future, we do not program the sound of an album, but we let ourselves be carried away by the inspiration of the moment. However we are developing some ideas for a new concept album, but it is still very early to talk about this, but something is boiling.

Bands like Lantlos, Deafheaven, Lento, Celeste and Drudkh have certainly influenced our recent music. I am currently listening to a lot of Italian prog rock from the 70s, like Le Orme or PFM, but also more recent music such Hexvesel.

Personally I'm a big fan of Cinema, I watch movies of all kinds, but my favorite record will always remain Sergio Leone. I also have the hobby of nature photography, I often walk in the pristine nature to take my photographs

Yes, I would like to point out that within our album there are images that contain a mystery, a sort of hidden message, if someone, who owns our album and can see the images of the booklet, has managed to decipher it can contact us