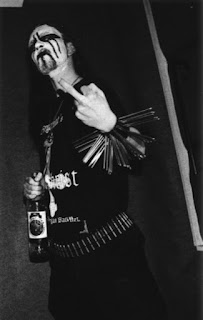 Hail! I formed the band in the beginning of 2002. I played in this time in a few bands but I still had some ideas which I couldn't realized with other bands. It was natural that I started a new band. Along with the guitarist with whom I played at that time in another band, we played a few rehearsals. After finding a drummer, we had only two rehersals and we played at the festival. Then we played one more rehearsal and in December 2002 we recorded a 40-minute demo in famous at this time Selani Studio. I will add that it is a full live recording.

2.How would you describe your musical sound?

Pure Fucking Black Metal! Even then, sixteen years ago, so many bands began to change their style, that already then I began to operate under the banner of "The Forgotten Ghost ov Black Metal", which has not lost its validity until today. I am not a hard-headed idealist who locked himself into the Black Metal of the early 90's, but MORDGIER was and will musically sustain the flame of the "old" Black Metal. For sure I will not record "In Deathcold Mist" part two but for sure it will be MORDGIER and Black Fucking Metal - chaotic, raw and antireligious music for real metallers.

3.On the demo you covered a lot of satanic topics, can you tell us a little bit more about your interest in Satanism?

I don't think there are many strictly satanic topics on the demo. Texts on "In Deathcold Mist" catch on Satanism, but there is more about suicide, death, misanthropy...

My view of the ideology of Satanism underwent a metamorphosis, which I consider to be natural in the process of gaining more and more knowledge. I listen to metal since 1993 and at first I have no interest in the subject of Satanism but I was 12 at the time, although more or less at the time I began to be interested in esotericism among others. With time, I entered the path of Satanism, Occultism and Black Magic. Studying philosophy and deep interest in various religions (I read the bible, the koran and other "holy" books - on the principle of knowing your enemy) also had a considerable impact on my philosophy of life.

I follow the Satanic way but personally, quite a long time ago I stopped calling myself a Satanist, but it does not bother me if someone calls me that. In addition, I consider myself an Antitheist. My Satanism? I try to follow my own path, in which you can certainly find elements of various varieties of Satanism, Luciferianism and various philosophical doctrines, but I don't follow blindly any of the existing varieties of Satanism, because it is as stupid to me as going to church. Being a sheep will always be a sheep, even if you will follow so-called The Left Hand Path.

4.Since 2003 there has not been any new material, can you tell us a little bit more about what has been going on during that time span?

The reason for the silence was very simple. In the end of 2003 Krieger (drums) left the band (due to the duties in private life and the distance, he lived in other city). In 2004 further cooperation with my guitarist was not possible and the band stopped activity but never split-up. For many reasons like private life, new band and big health problems, I hadn't time for normal activity, but in this time of inactivity I created some new songs. Oficially MORDGIER is active again since January 2016.

5.Originally the band was called 'Triumphant' what was the cause of the name change and also the meaning and inspiration behind the name 'Mordgier'?

Yes, TRIUMPHANT was first name of my band but I change it to MORDGIER a few months later. Why? I was looking for more brutal name that would suit my band's music more. The second reason was the popularity of the name “Triumphant” in various forms. Quite by accident I found the German word “Mordgier”, which can be translated as "the lust for murder, the lust for blood." 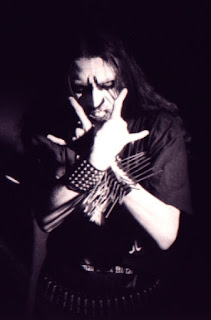 6.Originally the band was based in Poland but now located in the United Kingdom, what was the cause of the move?

Because I moved to United Kingdom in 2015.

7.What where some of the best shows that the band had played in the past and also how would you describe your stage performance?

MORDGIER played only one concert. In December 2002, we performed in Olsztyn (Poland) at the fourth edition of the underground festival "Night ov Torment". Apart from us, there were also such bands as VESANIA, PARRICIDE, THIRD DEGREE and EFFECT MURDER. Our performance? At that time, there was no Black Metal band in Olsztyn (our city) which used tons of nails and corpse-paints, inverted crosses and blood on performances. So I think it's true if I say that as the first of the Olsztyn bands we played a full true Black Metal concert - sonic terror, nails, satanic blaspemy, corpse-paints... We played all the songs from the demo. Madness on stage, madness under the stage.

8.Are you open to doing any live shows in the future?

Yes, of course. I like to play live but concerts are not a priority for me, in the sense that they are not my focus. So you can expect concerts in future, but it's too early for details. The priority is to record EP with a few new tracks and tracks for split 7”EP with NECROSADIST (Pol).

9.On the demo you had done some 'Beherit' and 'Darkthrone' covers, what was the decision behind doing your own versions of their songs?

Why these songs? I always wanted to record my version of "The Gate of Nanna". When it comes to "Quintessence" ... till today I think it is one of the best song of Norwegians, so when we decided to record a cover of this band, the choice was simple.

10.Can you tell us a little bit more about 'Antitheus Productions'?

Antitheus Productions is a small independent label, which I am a co-owner together with Vanadis. We are focused on quality, not quantity. We do not care about release a few or a dozen releases a month, because to be honest it is not difficult these days. In addition to new releases, we are also focused on publishing old materials - forgotten, unknown or those that are worth remind. More info: www.antitheus.uk

In 2003, after the release of the demo tape and now after the re-edition, the opinions that reach me are good and very good. But even if they were negative, I would not change my music anyway. There will always be opponents and malcontents...

12.What can we expect musically from the new material once it is released?

Less faster parts, more at medium tempos. Most of the tracks that will be on the next two releases (split 7"Ep and EP) are already a few years old. What can I add? As I say before – raw, “old school” Black Metal. Lyrics? A long time ago I left the writing of anti-christian texts. If I touch on matters of religion, I do not focus on one religion, lyrics are against all organized, institutionalized religions. I still deal with the subject of suicides and death, but from a different perspective, not personal. Satanic threads are still present, but you will not find texts like "Hail Satan! Kill the christians! Fuck you!" in MORDGIER!

During the creation of "In Deathcold Mist" I was heavily influenced by "Kronet til Konge" DODHEIMSGARD, "Destroyer" and "Incipit Satan" of GORGOROTH, early CARPATHIAN FOREST and “old” BURZUM. And I'm sure you can hear it on the demo (at least to some extent). Anyway, to this day I am under the influence of the above mentioned, and "Kronet til Konge" is one of the best Black Metal albums for me. What I listening nowadays? A lot of old albums and I'm totally out of date with new products. To name a few, the last few weeks I've been listening a lot of PEST „Hail the Black Metal Wolves of Belial”, THY DARKENED SHADE „Liber Lvcifer I: Khem Sedjet”, LYKAIONAS „Luciferian Fullmoon Necromancy”, LUCIFERION „Demonication” and BURZUM „Filosofem”. I like to search and listen to some less known or unknown bands, sometimes you can find a very interesting band... And I invariably listen a lot to my three best bands and the only ones I like whole (every single song) - DISSECTION, VINTERLAND and BLACK CRUCIFIXION. However, I don't think that what I am listening now has any greater impact on the music of MORDGIER

Remember - "When Hell Calls Your Name, There Is No Way Back" ! Thanks for the interview and your support.

Posted by OccultBlackMetal at 3:08 PM