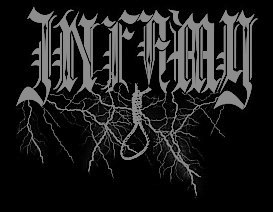 Yeah of course! INFAMY was born in 2011 on the ashes of other projects while we were listening to «Apocalyptic Raids» by HELLHAMMER and drinking beers (we are quite sure that most metal bands have been created this way. Cheers diehards!!!). Few days later we played our first song «Unfortunately you’re not dead yet».

2.Recently you have released your first full length, how would you describe the musical sound that is presented on the recording and also how does it differ from your 2 previous demos?

We wished that «A world on its end» sounds spontaneous and live. We didn’t want to use trigg’ or other kinds of artifices. We play old Black Metal and have the desire to perpetuate the tradition, to try to remain the most faithful of the recording methods of bands like BATHORY, DARKTHRONE, CELTIC FROST and so many others at their beginning. That’s why we chose and enjoyed working on this album with Fog at Le Caveau Studio. He immediately convinced us with his vision of music and the means he could provide us especially an analog recording. He has been like the third member of the band!

All differs from our two demos to our album. Six years have passed since our first demo so our relationship to music and our expectations have evolved. We also made a lot of tries before finding the good sound of the guitar and the bass, for the demos there was not this process.


3.The band members also have a background in death metal but with this band goes for more of a black metal style, how would you compare the 2 different styles?

Great!!! You make your investigation before contacting bands, good job guy! The definition of any musical style is personal because it’s a matter of feeling first and foremost. Both styles are an artistic interpretation of Death, Hate and Frustation of today’s world executed in different ways. Generally heavier and fat for the Death Metal, colder and grim for the Black Metal. We appreciate Death Metal as much as Black Metal, only the result is important : they form a real osmosis between them.

4.What are some of the lyrical topics and subjects you explore with the new release?

It will be so pleasant to see the human kind dominated and crushed by the Wild when he thinks he is superior. How can we pretend to be so smart face to the Elements? As we know a shit has no brain. It will be a deserved feedback.

5.One of your tracks is titled 'Black metal is Dead', which some underground purists would agree with, what do you feel is missing in modern black metal?

We don’t pretend to have the infused science but it’s true «Black Metal is dead» seeks the modern scene. People who feel concerned will surely treat us of fucking archaic assholes or fucking pretentious elitists we don’t care! We don’t want to forget where Black Metal comes from!!! The old bands like VENOM and BATHORY get the «Fuck you all spirit» and were more interesting than all of these bands who take themselves too seriously and just play as quickly as possible. The speed doesn’t make necessarily the brutality and the image of these bands is often misleading.

6.What is the meaning and inspiration behind the name 'Infamy'?

The definition of this word is very explicit… To tell the truth, Vincent was listening to MLP «Lead us into darkness» by DEMONIC and the word «Infamy», shouted out just before a monumental riff, has explosed in his ears and it was the revelation! It’s as simple as that!!!

7.Can you tell us a little bit more about the noose that is presented in the logo?

The logo has evolved over time. The first logo had lightning, the noose and two crossed axes, we removed the axes on the second, removed the lightning to keep only the noose on the third then finally we handed the lightning to get the current logo. The hanged knot… maybe because it’s the only way to die that gives one last pleasure to ejaculate. Or maybe because the crows can feed on the eyeballs of the hangman, symbol of the reflection of the soul. Is it not a good illustration of Death?

There is not really a best show on the other hand there are a lot of great memories : the honour to have shared the stage with AURA NOIR (a gig planned by scattered team of Underground Propaganda), a first concert with INFINITE TRANSLATION/DARK MANAGARM/CHILDREN OF DOOM/EVISCERATION, an unforgettable after party with thirty people in a flat of fourty square meters in Rennes. We can’t give the details it will be too long. How describe our gigs? A boiling rage in guts, a larsen to introduce each song, no communication with the audience, smelling sweat and a beer next to us. «Raw, simply, and ugly» like said the swedish band TYRANT… UH!ç

9.Do you have any touring or show plans for the future?

Indeed we have a gig in a few months but we can’t talk about it because it will be done under illegal conditions. A height after two years of absence on the stage, no? The situation makes us laugh…

10.Currently you are unsigned, are you looking for a label or have received any interest?

Initially Shaxul (Legion of Death) was interested in producing our album but some difficulties (fuck off downloading that kills the underground labels!!!) prevented him. So he put us in touch with Shota of Hidden Marly Productions. After some email exchanges we agreed on a deal. In summer of this year will release a japanese edition of «A world on its end». We salute you guys!!!

We have not yet had the opportunity to play beyond the French borders. However the album is very well distributed in France, Germany, Italy, USA and soon in Japan. Hope it’s a question of time before meeting and talking with fans of Black Metal from other countries.

12.What is going on with 'Evisceration' and 'Mass Grave' these days?

R.I.P! It was nice to play in these bands and we have good memories. Nothing more to say.

Who knows what the future holds? What is certain is that we will always play with sincerity. We will never turn back, we grew up and forged our way of life around metal. Our spirit is irradiated by this musical kind and it would be unnatural to play something else!!!

14.What are some of the bands or musical styles that have had an influence on your music and also what are you listening to nowadays?

We listen to all extreme metal kinds. We don’t search to sound like the bands we like. We think that an influence is unconscious and so inevitable. Some people told us have noted some similarities with CELTIC FROST, DARKTHRONE, BETHLEHEM for example and a touch of dirty punk.

First of all thanks to you  for this interview!!! We also want to salute all metalhead activists who support INFAMY :
- Fog and Le Caveau Studio, - Shaxul and Legion of Death,  - Zorg and Underground Propaganda, - Shota and Hidden Marly Productions, - Fab and Bleed Records, - Vic and Zineaholic, - Mari and Black Pandemie Prod’, - Olivier and Impious Desecration, - Patrick and Iron Bonehead, - Hervé and Osmose Productions, - Mike and Paragon Records, - G. and Bylec Tum, - Manu/Dimitri and Tapage Nocturne, - Corentin/Nico and Metal From The Crypt, - Cyril and Cluricaume Café.