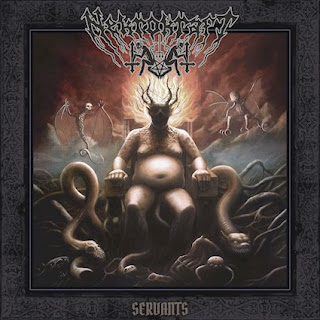 On  this  recording  Nekrokraft  expand  on  their  raw  and  melodic  mixture  of  black,  death  and  thrash  metal  by  adding  keyboards  on  some  of  the  tracks  to  create  something  different  from t heir  previous  releases,  the  production  sounds  very  professional  while  the  lyrics  cover  Satanism,  Occultism  and  Babylonian  and  Scandinavian  Folklore  themes.

https://metalinjection.net/av/new-music/nekrokraft-are-here-to-mosh-your-face-off-with-a-ballsy-blackened-thrash-assault
Posted by OccultBlackMetal at 7:12 PM