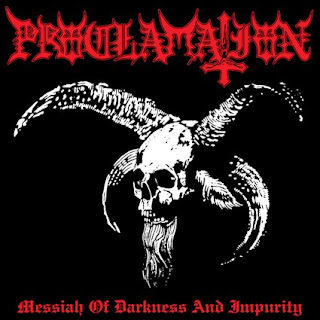 A  very  dark  and  ritualistic  sounding  intro  starts  off  the  album  along  with  some  synths  before  going  into  a  very  fast,  raw  and  brutal  war  metal  direction  which  also  uses  a  great  amount  of  blast  beats  and  tremolo  picking along  with  the  vocals  being  a  mixture  of  bestial  growls  and  black  metal  screams.

http://nuclearwarnowproductions.bandcamp.com/album/messiah-of-darkness-and-impurity
Posted by OccultBlackMetal at 7:58 PM