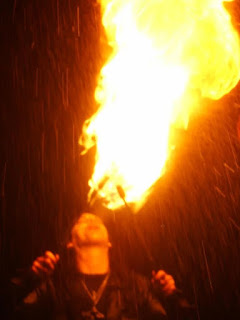 1.Can you give us an update on what has been going on with the musical project since the recording of the new album? - i have been working on this new album on and off for about 2 years so i have been tied up with that album for some time. finally i can start working on new ideas. i do working on something which is not far from finished. as it is right there is no recording dates or anything. probably in december we have something. all i can say is that it revolves around Chalice. old material, unreleased songs from the Chalice time will be recorded together with new trax.

2.You have a new album coming out in October, musically how does it differ from the stuff you have released in the past? - i have been working hard to not make not sound like Svartsyn. new set of ideas, new style of riffs. Not to repeat myself. this is the first album in like 8 years or so that doesnt revolves arround me and my spiritual experiences. this new album is written as a Requiem. a Requeim in 5 acts, eventhough there is 6 traxer the 5th track work as a prologue ,or what u say, to the last track Little horn. a Requeim. A spiritual journey through The destruction of the western civilization and the rise of Antichrist.

3.When I listened to the new album it sounds like a completely different band from the earlier albums without losing more aggression and very modern, do you fell it is very important to progress as a musician instead of doing the same type of album over and over again? - i hear so many band these day that the are working with the same style of riffs, same production style. not renewing themselfs, production-wise or whatever. for me its important to reset after each album. to have new ideas in all ways. production, sound, style of riffs. like i said i have been working hard make it not sound like Svartsyn. but here i am with a new album which i think sound exactly like a new Svartsyn album. Not sound like any of the older album, but new.  that's my musical identity.

4.Can you tell us a little bit more about the lyrical topics you explore on the new album and also how would you describe your progress as a songwriter over the years? - its a spiritual journey through the destruction of western civilization and the rise of Antichrist. heavily influenced by bible prophecy. my music witting was been since the beginning very focused, but i think over the years the depth and spiritual have increased.

5.You also have mentioned an interest in Satanism, Sumerian Mythology, Zecharia Stitchin and other forms of occultism and esoteric paths, can you tell us a little bit more about this interest and also how have your views evolved over the years? - yes i have been reading much about different stuff and of course it manifests through my music. since my heartoperation my spiritual search have become more direct focus. With the albums Black testament, Nightmarish sleep and In death. my search have come to an end.

6.I know that the bands name means 'pessimism' in Swedish, how does this name fit in with the musical style that you play? - When Chalice came to an end, i was thinking how to go on. The word Svartsyn came to me as it was meant to be. Svartsyn is negatively charged and fits perfectly the atmosphere it exude.

8.The band has been around since the early 1990's, what is it that motivates you to keep writing and creating music  after almost 30 years? - its a spiritual drive. something that comes from within. when we started out almost 30 years ago. we were inspired by the early Norwegian scene. Burzum, early Emperor, dark throne, immortal, thorns, mayhem. emperor and immortal for example haven't released their first albums yet. especially thorns and burzum inspired us. and of course Mayhem and tormentor. their music was without structure. that was what drove us. and still today this drives me. not many bands of today impresses me. but the early Norwegian bands did and still does.

9.What are some of the best shows that the band has played over the years and also how would you describe your stage performance? - Svartsyn haven't been playing live for 20 years. Last time Svartsyn entered the stage was at the Under the black sun festival in Germany 2000. we had limited material back then and today shows would have been different. more material to choose from. i tried to look for live session musicians for a while, didn't find what i was looking for. the line up we played with in 1997 was a great line up. that was the ultimate Svartsyn line up. times are different today and seeing svartsyn live today will never happen.
10.You have over the years done this band as a solo project but have also recorded with other musicians over the years, which one do you prefer? - me and Hammerman have a good collaboration and it works perfect for us. this is how it is now. working with other musicians in the rehears room is different where u can try and work on ideas. but now u have to be focused right from the start and be very prepared.

11.The new album is coming out on 'Carnal Records' which you have worked with in the past, what was the decision behind returning back to this label after working with 'Agonia Records'for the past decade? - Our contract with Agonia records came to an end and My first choice for Requiem was to have it released by Carnal records. we have worked with Carnal records before and know them very well.

12.On a worldwide level how has the reaction been to your newer music by fans of black metal? - i am not very active on social media so its hard to tell. of course i hear from some people here and there and read some reviews. overall the responses have been good.

13.Where do you see yourself heading into as a musician during the future? - i am working on one project at the moment. any further than that i can not see. i always work like the album/project would be the last. so i cant see anything beyond.

14.What are some of the bands or musical styles that you are listening to nowadays? - i really do listen to much music. but when i do it will be most older Death metal like early Morbid angel, early Bolt thrower, Napalm death. And Black metal. very seldom i check out new band or that i found interesting. so i keep myself to the bands i are familiar with.

15.Before we wrap up this interview, do you have any final words or thoughts? - thanx for the interview and be sure to check out Requiem that's out on 30th october. and also check out for previous albums as well. thanks

facebook.com/svartsyn666
Posted by OccultBlackMetal at 10:10 PM