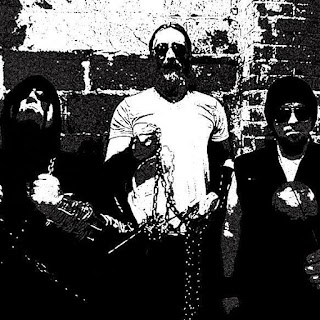 Dawn of Tyrants started around 2016 as a project that formed from a dead band after a decent hiatus. That saw us shift to a more Black/Death sound as opposed to a more Black Thrash sound prior. It’s been the three of us since that first demo.

2.Recently you have released your first full length, musically how doe sit differ from your two previous ep's?

The full length is more aggressive. In our first two releases we were exploring different avenues/genres, searching for that perfect sound. Yet we tried to preserve the barbaric ways of our demo records, the raw chaos that started this band.

3.What are some of the lyrical topics and subjects the band explores with the newer album and also how would you describe your progress as songwriters over the years?

Main themes of this full length are war, death, destruction and human nature. An attempt to describe a destructive essence of our species. Where ever we go as civilization, whatever we do, corruption overtakes our most pure intentions. Always coming down to destruction of what was built

4.What is the meaning and inspiration behind the name 'Dawn of Tyrants'?

Initially the Tyrants were us. Just came up in brainstorming at the time along with some other names. It seemed a proper ideal when considering our lyrical themes and various imaging propaganda.  However it seems that the tyrants are now others as the world has taken a hard shift into utter garbage by plan instead of happenstance.

5.How would you describe the artwork that is presented on the new album cover?

Representative of death and destruction. That’s been an ongoing theme since the beginning and we finally found something grizzly enough to convey what we’re tying to say. That piece was originally an anti war painting but we obviously do not share that opinion. All war is good. All death is better.

The best show I feel we’ve played was with Sortilegia sometime pre-plague. It was at a small venue that was used for burlesque shows so everything was red velvet and antique woods. Compared to the usual piss soaked shitholes we usually play this was an extreme difference and that difference along with actual good sound, made it an interesting show. As for our stage performance, I find the more we do the better it goes. We’ve played some basic ones with whatever clothes we’ve worn that day on stage and others with the chains, nails, hoods etc. and those always go better. Sets the mood, the mood of death.

7.On the album you also done a 'Type O Negative' cover, what was the decision behind doing your own version of one of the songs?

This one is for the ladies

8>The album was released on 'Black Market Metal Label', how did you get in contact with this label?

We’ve known each other from our local scene for some time and we were contacted after the ‘Sniper at Heaven’s Gate’ release about possibly working together and although we’re way behind schedule, we got it done finally. Much appreciation for Black Market for their help and patience. A lot of shit went down since we started this recording but we persevered.

9.On a worldwide level how has the reaction been to your music by fans of war, black and death metal?

Most reactions were to our demo as Genocide Supremacist is fairly new but it seemed to go over well amongst the people who don’t care for beautiful, proper sounding metal. We prefer it ugly and I feel there’s something in the flaws and ugliness in certain recordings that makes them great. Nowadays everything is Protools and it all sounds the same. Same scooped guitars, same triggered drum clicks, and the same perfectly leveled vocals. It’s just all so boring and lifeless. I would gladly take a 4 track raw recording over the mass produced Metalcore sounding drivel we’re bombarded with these days.

There are few things that we want to experiment with. Exotic scales, industrial sounds, only time will tell what the next release will sound like

Mostly a mix of Black Metal and Death Metal, some Thrash, Sludge and Doom as well. Everyone in the band has their own personal tastes. I usually go for War/Bestial Metal, OSDM, Sludge & Doom. Our influences are more of the same. You can hear War Metal, Death and Thrash more so I think on Genocide. Some slower doomy influences in “Void” towards the end of the album and that’s something we’ll expand upon in the future.

The world is shit and it’s getting worse. Live while you can, die when you must, and fuck with everything in the middle.

Posted by OccultBlackMetal at 5:18 PM