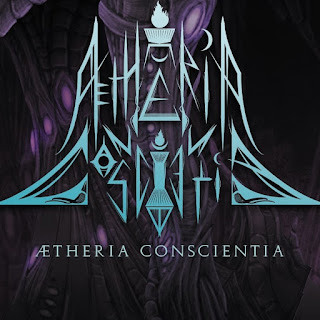 We are a sci-fi themed progressive black metal band from Nantes, France. We formed in 2016, on the ashes of our previous bands, willing to play black metal that embarks the listener on a journey through space. We try to incorporate various elements from progressive rock, doom metal, jazz and ambient in our music.

We released our first album, Tales from Hydhradh, in early 2018, and our new album, Corrupted Pillars of Vanity, is coming out on April 9th, 2021.

It’s the natural evolution of our first album, we pushed things further, breaking the codes even more stylistically, tried new things such as much more present percussions, more vocal styles, ambient layers, and a few other surprises. The songwriting is much better, the songs are more elaborate, with better arrangements and structures relating to the story we’re telling through our music and lyrics. The album’s story and music were built together, as we were trying to create a much more coherent record.

3. A lot of your lyrics cover science fiction and space themes, can you tell us a little bit more about your interest in those subjects?

The four of us are big fans of science fiction, over several media such as movies, comics, video games, books, visual arts etc… Our main influences are the BioShock video game series, Star Wars, H.P Lovecraft, Isaac Asimov, Fahrenheit 451, a lot of cyberpunk and sci-fi/horror movies…. all this stuff is our common background and has influenced us in the creation of our own universe, with its own story.

Everything revolves around the planet Hydhradh, a corrupted environment where humanity tries to survive, eons after our era, and each song we’ve written is like a small window opened on this world. Everything is part of a much bigger story and universe that is always expanding, and that we try to keep coherent.

4. What is the meaning and inspiration behind the name 'Æthĕrĭa Conscĭentĭa'?

It’s latin for “Ethereal Consciousness”, which is the divinity worshipped by the people of Hydhradh, and can be interpreted in many different forms. So religion and spirituality are pretty central in the themes evoked in our stories.

The artwork was created by our dear friend Amaury Pottier, who had already done the artwork for our first release, and managed to perfectly encapsulate the spirit of our universe in his works. It relates the most to the album’s final songs, forming the “Absurd Crusade” diptych, depicting the arrival of cultists into the depths of Hydhradh, looking for what they believe to be the answer to all of their questions, only to face the Kholoss, elder guardians devoted to the Ætheria.

And in addition to the album’s artwork, Amaury created illustrations for each individual song on the record, contributing to our visual universe.

6. Has the band done any live shows or open to the idea ?

We have done a few shows, some with big names such as Tchornobog, Borgne, White Ward or Uada, but obviously the global pandemic has put an end to the whole live industry. For now, we’d rather focus on creating new music and content. Maybe we’ll start playing shows again in the upcoming years, but it’s not planned in the near future.

7. Currently you are unsigned, are you looking for a label or have received any interest ?

We reached a few labels when we were planning the album’s release but we quickly decided to remain independent for this record, and it was an interesting and formative experience to keep our hands and eyes on all the aspects of the release. For now we’re happy as it is, but maybe in the future we’ll change the way we work, we’re not closed to a collaboration.

(At the time of writing, only our first album Tales from Hydhradh (2018) and one song from the upcoming album  Corrupted of Vanity (2021) has been publicly released)

To our knowledge, people seemed to understand that our goal is to embark the listener on a journey through our music, and the response to it has been generally pretty good. Maybe a few people were put off by our experimentations, but that’s something we’re expecting and fully okay with.

9. What is going on with 'Ediakara' these days, which shares some of the same members?

This band does not exist anymore, it was Paul and Alexis’ first band together, that merged with Cosmic Storm (Tristan, Paul and P.A. previous band) to become Ætheria Conscientia. These bands really weren't much more than teenagers’ first bands, even though some elements of it can still be found in the music we play today.

10. You also had a guest appearance from a member from 'White Ward', can you tell us a little bit more about his contribution on the recording?

We had the chance to meet the guys from White Ward when we played a few gigs together in late 2019, and they are great people. Given our mutual respect and common musical backgrounds, it seemed natural to engage in a collaboration. So we invited Dima to perform two saxophone solos (on Elevation in Arrogance) and Andrii to sing (on Asporos’ Altering Odyssey, the album’s opening track), and we’re really happy with what came from their participation. We look forward to doing more stuff with them in the future and collaborating with more people.

We’re planning to develop our whole universe, release new stuff more frequently and try new things musically, exploring new genres such as psychedelic, doom, sludge, maybe an acoustic release, those are a few things we have in the pipes. We have lots of ideas and look forward to presenting them to you !

12. What are some of the bands or musical styles that had an influence on your music and also what are you listening to nowadays?

When we first started we were influenced by Mare Cognitum, Blut aus Nord, Voivod, King Crimson, mainly progressive rock or metal and atmospheric black metal. Nowadays, while it is still the music we love and an integral part of our musical DNA, we’re taking more influences from bands such as Oranssi Pazuzu, Aluk Todolo, The Kilimanjaro Darkjazz Ensemble or Yob.

Apart from the band’s influences, we all listen to a pretty large musical spectrum, from french disco-pop to avant-garde death metal, from dark-jazz to powerviolence.

13. Before we wrap up this interview, do you have any final words or thoughts?

Thank you for the interview and your interest in the band, thanks to everyone listening to our music, that has been supporting us in any way. We hope you will enjoy Corrupted Pillars of Vanity, we’re excited to hear your opinion about it.

Posted by OccultBlackMetal at 5:19 PM