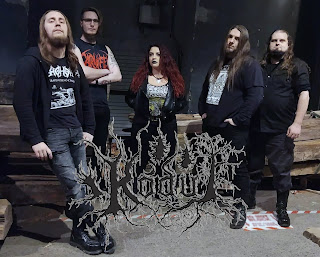 For those that have never heard of you before, can you tell us a little bit about the band?

You have a new album coming out this month, can you tell us a little bit more about the musical style that you went for on the recording?

Musically this album is a combination of second wave roughness with a modern dissonant touch. It pays respect to old school masters and at the same time offers listeners an interesting approach to black metal. “Unusta kõik” - means “Forget everything”. Production wise this album was mixed on an analog desk without modern plugins, automation or other techniques. What you hear on the album is the raw performance of Kõdu on instruments and Vincent on vocals.

A lot of your lyrics come from Estonian poets of the 19th and 20th century, which poets have you brought into your lyrical content?

Poems used on “Unusta kõik” are from Juhan Liiv, Ilmar Särg, Peeter Ora rearranged for the music by Kõdu.

You have also mentioned an interest in the mythology of home country, can you tell us a little bit more about your interest in this topic?

Yes, I (Kõdu) am personally fascinated by the life of my ancestors and the history of this land. Ancient estonians lived by a collection of wisdom and traditions known as “Earth religion”. It focuses centrally on the person itself and the connection of nature to humans. They believed that everything (lifeless or not) possessed a soul or power of some and rather lived by the law of nature.

What are some of the other lyrical topics and subjects you have explored so far with the music?

On “Unusta kõik”, main lyrical topics are nature's connection to man, the philosophy of Northern tribes who lived in this region.

What is the meaning and inspiration behind the name 'Kõdu'?

Kõdu means “decay” in English. The process of decomposing is quite poetic if you think about it. All that is living once came from nothing and at some point returns to nothing. We Estonians say that “from soil you came and soil you will become”.

Can you tell us a little bit more about the artwork that is presented on the new album cover?

The artwork is titled “Coal burners” by Ernst Hermann Schlichting, an Estonian painter from the 19th century. It depicts three men producing coal for a mansion or a big building of some sort (as seen from the smoke in the distance). This job position was held by mostly peasants and lower class citizens in the 19th century, most likely local Estonians doing it for the Baltic-Germans living in the region.

Has the band done any live shows or open to the idea?

The new album is coming out on 'Nigredo Records', how did you get in contact with this label?

Our rhythm guitarist Samantha Surmatalv had a contact in the label. In our opinion, Nigredo Records is the perfect platform to expose Kõdu’s music. Kõdu would like to thank Katia of Nigredo Records for the help with releasing “Unusta kõik”.

On a worldwide level how has the reaction been to your music by fans of black metal?

The album will be released very soon, but we have sent it for premier listening to promoters and zines. We have received positive feedback about the production and the approach we have to black metal. For example, moshpintnation.it called the album “mind-melting and forward thinking”.

We are in currently in the process of presenting “Unusta kõik” material in live concert form and also working quietly on new material for a future release. Musically speaking, we wish to head to a direction of a more straightforward and mesmerising listening experience while still having the experimental approach with elements of surprise, epic melodies and dissonant harmonics.

Kõdu’s music has been most influenced by the early period of Gorgoroth, Taake, Pest (Sweden) and from the earlier creation of Deathspell Omega as well.