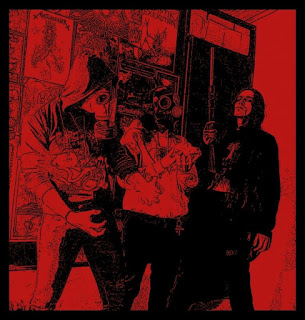 Cheers!!! Here Necropervertor, guitars & vocals from Black Communion, by now just returning to the rehearsal room since we have practically 5 months without any rehearsal! Putting things together and recovering all the time this pandemic took away...

Personally the BC releases I like more are the Split with destroyer attack, the Funeral Incantation EP and the recently released MIASMIC MONSTROSITY, these 3 last recordings defer from demos and other releases because we started song-writing about death, Graves, Cemeteries and the darkness of the afterlife...

3.A lot of your lyrics cover satanic and occult themes, can you tell us a little bit more about your interest in the dark arts?

At BC we all are interested in Black arts, ancient rites, weird cults and Lovecraftian literature, I think those topics are the ones that identify a Band as a Black metal act so we wanted to follow that path of exaltation of demonic legions and blasphemy, as I mentioned on last question right after the FUNERAL INCANTATION EP we're more interested about death , Graves and afterlife horrors...

4.What are some of the other lyrical topics and subjects  the band has explored over the years with the music?

5.What is the meaning and inspiration behind the name 'Black Communion'?

Just wanted a name based on our initial Black metal influences, nothing special... Just one day I came up with that name and the drummer and Guitarist back then liked it.

Artwork was commissioned to a talented person in Peru ( Temple of Kaligat arts) who actually transformed into art the ideas I had about a demonic figure formed by the emanations of the dead, on medieval times people thought that the miasma was the cause of all sickness so we just wanted to portray a death-like figure coming from the deceased.

We played with mighty Mystifier from Brazil in 2015 it was killer! Also we played last December in a couple of cities near to Bogota ( capital city of Colombia) people was kinda impacted that a band from our city can do such extreme sound, this because our region has not a huge metal-rock tradition... Performance in stage is basically spikes, blood and war paint!

8.Recently you where a part of a split with 'Destroyer Attack', what are your thoughts on the other band that had participated on the recording?

Destroyer attack is the band from Jonathan Amaya who also owns TANATOFOBIA PRODS. he was the first person who released BC material (morbid defilement demo + envenoming the Graves live tape) we feel infinite respect to him and his horde... Hail DESTROYER ATTACK!!!

9.You also have done some 'Von' and 'Impetigo' covers, what was the decision behind doing your own version of their songs?

VON cover represents our devotion for old Black acts and is one of our main influences, also we honor a great gore/death/grind act such as Impetigo... We decided to start editing our songs with horror movie samples just because of them,  so basically we praise Black and death metal through exaltating those bands.

10.On a worldwide level how has the reaction been to your music by fans of war, black and death metal?

Always have been maniacs around the world buying our releases, people from South America, USA, Spain, Germany, Mexico, Canada have been always in contact with us so I'd say that we have acquire sort or international recognition... We hope our music will be widely distributed by DUNKELHEIT PROD. On this recent release so I hope even more people around the globe will be in touch...

Probably touring Europe or South America when it comes to shows, We're not planning or song-writting a new release, bnad will be on hold when it comes to that but actively rehearsing for maybe upcoming shows but I have in mind maybe a compilation taking tracks from EP Funeral Incantation + Ominous malignant EP... Let's see if any label is interested in releasing it...

We started strongly influenced by VON, IMPALED NAZARENE, BEHERIT, BATHORY and PROFANATICA, we keeped the Black Metal sound but now with a new lyrical content related to horror and death as I mentioned previously.

Keep supporting your local bands and favorite acts! Buy their records! Thanks to DUNKELHEIT PRODUKTIONEN for releasing our Full length and thanks to worldwide maniacs that have been in contact with us!!! Thank you for this interview and supporting underground Black Metal...
Cheers,

https://www.facebook.com/Black.Communion.Col/?fref=ts
Posted by OccultBlackMetal at 11:38 AM