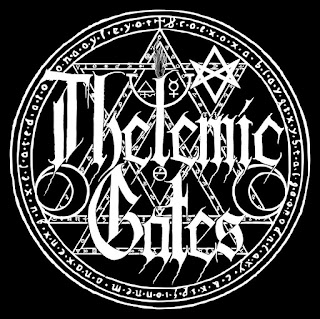 Thelemic Gates was formed in 2015 By Ignis(Guitars, keyboards) and Ruho(Vocals, drums), later in 2018 we developed into a full line-up as Phobos(Guitar), Deimos(Bass) and Noitavasara(Drums.). In mid 2020 Ruho decided to leave the band and was soon replaced by Castor as our lead vocalist. Our style is rather progressive, varied and melodic blackmetal, quite a unique beast in the Finnish scene.

2.So far you have released a demo, can you tell us a little bit more about the musical style you went for on the recording?

Sielun koettelemuksien porteilla was very much influenced by the more melodic and melancholic style of black metal. Bands such as Baptism, Blood Red Fog, Cosmic Church and Alghazanth are bands that were listened to a lot at the time. Ignis has always been a fan of movie soundtracks and symphonic music in general, so that’s why the keyboard tracks are quite big. Yet they didn’t become full on symphonic, which was done on purpose.

3.All of the other band members are involved with other bands, what is it that you bring into the music of 'Thelemic Gates', that you are not able to do with your other groups?

Only our drummer and vocalist have other active projects, actually. Thelemic Gates plays black metal, and just like everyone knows, black metal is defined more by the ideological and lyrical aspects than the actual music. This opens a lot of wide doors and therefore we are able to incorporate various different styles and combine them into one cohesive sound. That’s something we have never been able to with any other bands or projects we have been involved with.

4. A lot of your lyrics cover occult and witchcraft themes and the name 'Thelemic Gates' came from the writings of Aliester Crowley, can you tell us a little bit more about your interest in the esoteric arts?

The world we live in is not what it seems on the outside and there’s so much more than what the eye can see. It is by going below the surface and studying different traditions you can truly see how this existence is built and how it operates. This enables you to reach your true potential and become something more than one could have thought. For us this is essential: This band is about growth and we’re constantly going beyond. Being stagnant is just simply not an option for us.

5.Your also cover nature worship, misanthropy, and anti authoritarian free thinking themes, can you tell us a little bit more about what these subjects mean to you?

Misanthropy is just a natural reaction to the vanity and the general state of humankind of today. It is about choosing to live your life as a wolf rather than a sheep and living by your own morals and rules. Do what thou wilt shall be the whole of the Law. It is a good rule to live by: Live your life as you choose. Let your destiny be filled and see the world as it is.

6.Can you tell us a little bit more about the artwork that is presented on the demo cover?

The original artwork was created by Artifex IC, who is best known from his solo project IC Rex. The cover symbolizes a new beginning and steps into the unknown, which is very fitting since it’s our first release and a beginning of a new era in our lives. The cover shows twin pillars between which is a scroll that reads ‘PLVS VLTRA’ (plus ultra, further beyond) and they represent what we just wrote: The twin pillars and the scroll express harmony and balance, but they also represent a gateway to sacred and mysterious places, to the unknown and a chance for a new beginning. The tape release of the demo has artwork made by Noitavasara, drawing a lot from his personal experience and knowledge of the occult, nothing on the album art is by chance, all with hidden meanings and layers of symbology. The release of the tape was a numerological ritual which closely ties in with the contents of the album art.

7. Has the band done any live shows or open to the idea?

We have played two live shows, and one of them is released on b-side of ‘Sielun koettelemuksien porteilla’ cassette. and will do more in the future.

8.'sfbm' also released your demo on cassette, can you tell us a little bit more about this label?

SFBM is not really a label, nor are they a traditional distro either, but an alliance of black metal bands to sell their products through one channel. So they did not release the tape. They’re only distributing it. SFBM will, though, do some small runs of their own products. SFBM’s purpose is to gather black metal bands from the underground so that they can be promoted in unison. As said, it’s an alliance rather than a traditional distro or a label.

After setting on an extensive online promotion campaign not long ago, the response to everything from our music to lyrics to album art and concept has been overwhelmingly positive, there clearly is a wide and growing audience for us.

We have about an hour worth of unrehearsed material and we are looking to release them as a full length. The material is much more diverse than anything else we have done before. Influences include other styles of outside black metal or metal in general. Genres like occult rock, progressive rock, post-rock and even jazz and classical music are genres that have influenced these songs, yet they still have a strong extreme metal core. We would say that by the time we had written these songs we had found our style so we don’t see it changing drastically from what it is on these unrehearsed songs. The debut LP is well planned out in advance, but details of the release dates and formats are yet shrouded in mystery.

As mentioned, the first demo was very much influenced by the more melodic style of black metal. Since then it has developed into a more diverse style with influences from other genres as well. Like occult rock, progressive rock, post-rock, jazz and classical music.
Nowadays our musical tastes are extremely varied. Some of these bands / artists / composers include Emperor, Deathspell Omega, Dødheimsgard, Oranssi Pazuzu, Gris, Miserere Luminis, If These Trees Could Talk, Syberia, King Crimson, Steven Wilson, The Devil’s Blood, Year Of The Goat, Blood Ceremony, The Kilimanjaro Darkjazz Ensemble, Bohren & der Club Of Gore, Message to Bears, John Williams, Hans Zimmer, Arnold Schönberg, Francisco Tárrega, Isaac Albéniz, Led Zeppelin, Deep Purple, Queen and The Rolling Stones to name a few. Good music is good music and it would be foolish to limit yourself.

Greetings to Andras from A Mors Et Bello from Mexico and to the fantastic metal scene of the Americas!

This is only the beginning.

Posted by OccultBlackMetal at 12:26 PM