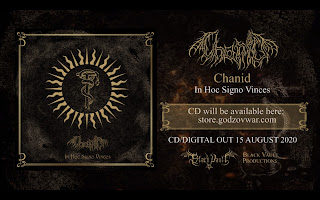 On  this  recording  Chanid  takes  their  old  school  style  of  occult  black  metal  into  more  of  a  melodic  direction  but  also  keeping  around  the  raw  aggression.  The  production  sounds  very  professional  while  the  lyrics  cover  continue  the  story  of  Lucifer  that  was  introduced  on  previous  releases.

https://www.youtube.com/watch?v=pecAfUpj-sc
Posted by OccultBlackMetal at 11:49 PM