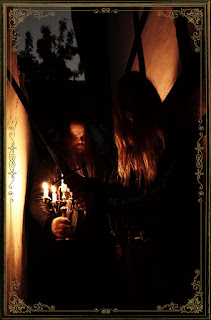 1. Can you give us an update on what is going on with the band these days?

Skóggangr: - We are currently in the process of setting up vocal sessions for our following release. All music and lyrics are ready, and we think it will be a great continuation of the story we tell on "Den Rædsomste Nat".

2. You have your first full length coming out in September, can you tell us a little bit more about the musical style you went for on the recording?

Garðarsson: As I am a huge sucker for Finnish Black Metal, I wanted to write an album with a more melodic and epic approach. But still keep it in the vein of the 90’s. So you can definitely hear the Scandinavian sound throughout this album.

3. The lyrics on the new recording are a concept album, can you tell us a little bit more about the story you have covered with the music?

Skóggangr: - The story covers the fateful days of the bombardment of Copenhagen in 1807, from the landing of British forces in late August, the 3 night bombardment itself between September 2nd - 5th, and the resulting subsequent theft of the Dano-Norwegian navy from Copenhagen. I've wanted to strike a good balance of historical truth and the romantic spirit of the poems of the early 1800's, and I think I've come quite close to a perfect balance in capturing the defeatism and anger of this unjust act, as well as the language of that time. Unfortunately it's all in Danish, so all my linguistic care is all lost on our international listeners, sadly. Just know that I've cared immensely for the lyrics! (laughs)

4. The band also has a lot of interest in history, can you tell us a little bit more about the historical events that have the most interest to you?

Skóggangr: - Personally I have a huge interest in the First World War and its aftermath, as well as the Roman Empire and Asia around the time of the Mongol conquests. I don't think we'll get around to cover any of that since we, for the time being, will remain focused on Danish events, which might be smaller in scope, yet they are still important and close to us.

Garðarsson: Growing up, the only thing I would read about was World War 2. So that definitely has had a huge interest for me. My historical interest is now more focused on Denmark in the 19th Century, which also was the driving force to create this band in the first place.

5. You have also mentioned an interest in poetry, which poets have had the most influence on your music and worldview?

Skóggangr: - That would be Christian Winther, who wrote "Matrosen", and N.F.S. Grundtvig who was one of the most productive poets and writers of his time. "Matrosen" is in many ways the spark of this album, the emotions which it conveys carries on in many of the other lyrics in one form or another. Grundtvig is equally fascinating due to his influence; He experienced many of the pivotal Danish events of the 19th century (The bombardment, the signing of the constitution in 1849, the Danish defeat of 1864) and wrote about them, and he was close to many of the important figures of the day.

6. What is the meaning and inspiration behind the name 'Ildskær'?

Skóggangr: - The name translates into something like "Fire-glow". Considering the subject of this album, it's appropriate, and we will probably keep having at least a nod to fire and devastation on subsequent records.

7. Can you tell us a little bit more about the artwork that is presented on the new album cover?

Skóggangr: The artwork is painted by the Danish golden age-painter Christian August Lorentzen, and it is one of his most well-known works. "Den Rædsomste Nat" is almost like a complete snapshot of the bombardment; the church is on fire, grenades are tearing through the sky and landing in the square, all the while the citizens are beside themselves in fear. A very dramatic and eye-catching scene indeed and an obvious choice for cover artwork.

Garðarsson: Fun fact about this: I randomly came across this artwork, when I saw that the Danish National Museum of Art was having an exhibition with this artwork among others from the Golden Age. I instantly saw our album cover (which was originally thought for my other band Ì Myrkri), and I contacted the museum asking for permission and they took a photo of the original painting for me. That’s how this whole project came to life.


8. Currently there are only 2 members in the band, are you open to expanding your line up or do you prefer to remain a duo?

Skóggangr: - We will probably expand with a few session members for concerts, but so far it works with just the two of us making decisions.


9. The new album is coming out on 'Wolfspell Records', can you tell is a little bit more about how you came in contact with this label?

Garðarsson: I already had a deal with Wolfspell, with my other project, Ì Myrkri. So it came naturally for me to ask if he was interested in Ildskær. I am much honored to work with him and have my music alongside many of my favorite acts.

10. On a worldwide level how has the reaction been to your music by fans of black metal?

Garðarsson: There have been quite large interests I feel. Especially after we released the first single and we explained the whole concept of the band and album. So a good reaction I would say.

11. What is going on with some of the other bands or musical projects these days that some of the band members are a part of?

Skóggangr: Genfærd is currently gearing up for a few concerts in a few months (providing they will actually happen due to current circumstances), and we are starting to slowly write new material.

Garðarsson: I am not very active with my other project Ì Myrkri, as all my focus has been on Ildskær. As mentioned earlier, I have been writing and recording the next album to completion already. But I just signed a deal with Vendetta Records for a Vinyl Release of my first album with Ì Myrkri; Black Fortress of Solitude. And my second album with Ì Myrkri; Drivende I Dødens Æter, also gets a Vinyl Release with Wolfspell Records. Both will see the light of day this Fall. I am planning a single release though, which will be a part of a 7” compilation of local bands from Aalborg, where I’m based.


12. Where do you see the band heading into musically during the future?

Garðarsson: I can’t really say for sure, but I will continue with the melodic, old-school and Scandinavian sound. Exactly how I like my Black Metal. The next album will probably define our whole sound musically.


13. What are some of the bands or musical styles that have had an influence on your music and also what are you listening to nowadays?

Skóggangr: - I listen to a lot of the new black metal emerging from Iceland and Poland, and I'm always on the lookout for new interesting releases, but sometimes the Norwegian classics does it for me as well. Beyond metal I listen to a lot of jazz, ambient, new wave and post punk. I consider Agalloch, The Cure, Fields of the Nephilim, Emperor, Leviathan and Ulver some of my greatest influences

Garðarsson: Musically I’ve been inspired the most by the Finnish and early Norwegian Black Metal scene, bands like Sargeist, Behexen, Satanic Warmaster, Burzum etc. Right now I’ve been listening to a lot of Black Metal/Dungeon Synth – Paysage d’ Hiver, Evilfeast and some new bands in the likes. Dungeon Synth and Dark Ambient is probably what I listen to most, when it’s not Black Metal. But like Skóggangr I also listen to a lot of other genres. Drone, Psych, Doom, Stoner and Dark Wave etc.


14. Before we wrap up this interview, do you have any final words or thoughts?

Garðarsson: We’ll see you all to the full album premiere August 29th via Black Metal Promotion. This album has been a huge effort for the both of us, we have put everything we have in it, to make it as an accomplished concept album as possible, the physical copies will especially signify this.