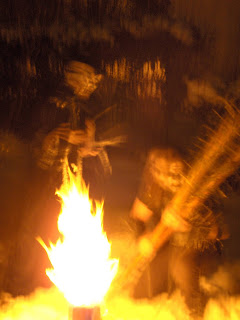 Perisynti plays non compromising, raw and aggressive Finnish black metal, born from the need for me and Krimm V. to find a way to search for the most extreme musical expression imaginable. We had the idea for the band along with suitable riffs piling up since the late 90's. Around 2004 we felt that the time was ripe to make it into something bigger, to give our music to those who deserve it.

2.With this band you released a demo, ep and a full length, musically how do they differ from each other?

The overall sound has stayed the same all the way through as our vision hasn't faltered one bit, but each release has been an experiment for the perfect cold atmosphere and the extremes of where black metal sound can go, without compromising our mostly straight forward approach to it. We are traditionalists, we do things old school. Fast and simple. On our coming release we're going for a bit more mature approach you could say, with more musical variety than before. Overall we're not about so much progression, we don't feel a need to reinvent the wheel.

3.There has been no new music since 2010, can you tell us a little bit more about what has been going on during that time frame?

We do music when it happens naturally, when the inspiration hits us. We're not a band in a hurry. Also in the last decade, we have been very busy with our lives, including other musical endeavours. We felt that now its the time to raise from the grave and let the fires of hell burn bright once again. We have unreleased material from years ago, riffs and ideas have been piling up, waiting for this moment in time. We are not a commercial band, so the only meaningful driving force is our dedication and passion for this music. We do things in a spontaneous way, we might write a full album, record and mix it in few months if we feel like it.

4. A lot of your earlier lyrics covered satanic themes, how would you of described your views on Satanism back in those days?

We stand against all abrahamic rot. All of it. Satan is the adversary, the God of rebellion, the master of free will. I can only answer this question for myself that my personal philosophy is very much in line with Satanism, it was back in the day, it is now and so shall it stay.

5.What where dome of the other lyrical topics and subjects you have explored with this band?

A lot of our lyrics have double meanings, layered symbolism and metaphors. Far deeper than what you will see on the surface. There's an element of anti authoritarian and anti religious theme going on in many. Also glorifying free will if you can read between the lines. The lyrics are more than just the words.

6.I know that the band's name means 'original sin' in Finnish,how does this name fit in with the musical style that you play?

Perisynti is a perfect name for us ,we are the original sin, not just any sin, the deep rooted pagan sin that lives in us. The idea that all are born as "sinners" is something so foreign to anyone with a functioning brain that we thought to pick is ours, aligns perfectly with our musical vision and style. We don't give a fuck about correctness, to hell with correctness, to hell with those who push this kind of moronic ideas. If being a critical thinking, free will glorifying pagan is to be born as a sinner, that's what we're about.

7.What where some of the best shows that the band played in the past and also how would you describe your stage performance?

We do not perform live. Will we ever be seen on stage, time will tell...

8.On your releases you worked with 'Varjot Productions', 'Northern Silence Productions' and 'Fog Of the Apocalypse Records', do you feel these labels were very helpful when it comes to getting your music out there heard?

Yes, the record labels have done excellent job in the past and hopefully will keep doing so in the future.

9.On a worldwide level how has the reaction to your music by fans of black metal?

The reception has been overwhelmingly positive, I can't think of a single negative comment on our music, so good has it been. This is part of the reason why we are now reaching out to a wider audience, there are a lot of deserving dedicated fans out there with whom we wish to celebrate the black flames of our creativity.

10.When can we expect new music and also where do you see the band heading into musically during the future?

Soon. We have secured a deal for several vinyl releases, most likely first of which will be a 12" gatefold vinyl release of our debut album Hiilenmusta lammas with new artwork. We are also on the finalizing touches of a new 7" vinyl release, two songs originally written around 2007, but only now recorded as cohesive songs. Also we have agreed upon writing and recording our second full length album carrying the title Pimeytemme (Our Darkness.) All these will be released on vinyl, through a reputable label with an extensive catalog. The release dates are still obscure, but expect the re-run of the debut before this year has passed. Second LP will likely be released in 2021. We are quick to write and record music so the process will likely be rather fast. But we take no pressure for it, let the inspiration and the fire burning within to keep the pace. We are on the lookout to release the new material on other formats also as the contract is non-exclusive and includes vinyls only. So any respectable labels who are interested in releasing us on tape and cd, contact us.

11.What where some of the bands or musical styles that had an influence on the music of 'Perisynti'?

There are many, you can clearly hear the influence of Carpathian Forest, Horna, Behexen, Darkthrone, Burzum among others with little effort. But our influences are wide and far reaching, we do not limit ourselves on what to get influenced by.

I would like to give a shout to all magnificent, dedicated fans out there, you know who you are. Also greetings to Andras from A Mors Et Bello and the fantastic metal scene of Americas!

https://www.facebook.com/perisynti
Posted by OccultBlackMetal at 11:54 AM