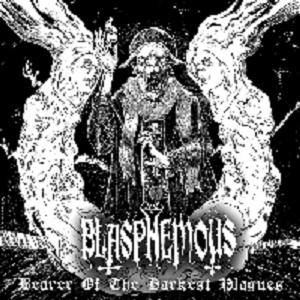 Blasphemous are a band from Philadelphia/New Jersey that plays anti christian black metal that takes influences from both death metal and thrash and this is a review of their 2010 album "Bearer Of The Darkest Plagues" which was released by Baars Records.

Drums range from mid paced to fast drumming with a lot of brutal blast beats that mix the heaviest black metal and death metal together, while the bass playing has a very strong tone that sounds very dark and evil.

Rhythm guitars cover a lot of ground with a lot of fast and raw black metal riffing mixed in with some dark death metal and thrash riffs, while the lead guitars have a distorted and melodic feel that is heavily influenced by the masters of mid 80's and early 90's extreme metal.

Vocals are mostly high pitched black metal screams with some deep death metal growls thrown in, while the lyrics seem to be very hateful and anti christian with a satanic edge, as for the production on this recording it has a very heavy and raw feel while still having a professional sound that captures all of the musical instruments.

In my opinion Blasphemous are a very talented band that takes underground black metal and mixes it with classic blasphemous death metal, and if you are a fan of anti Christian black metal or even satanic death metal you should check out this album. RECOMMENDED TRACKS INCLUDE "Genocide Of The Kingdom" "Path To Our Demise" "Among The Wolves" and "Decimator Of Holy Manifestations". RECOMMENDED BUY.

www.myspace.com/blasphemousmetal
Posted by OccultBlackMetal at 1:30 PM