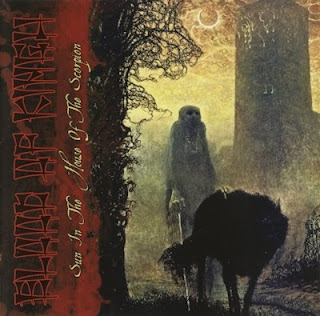 Blood Of Kingu are a band from Ukraine that is led by the mastermind behind Hate Forest and Drudkh and this is a review of their 2010 album "Sun In The House Of The Scorpion" which was released by Candlelight Records.

Drums are very fast with a lot of blast beats mixed in with some slow and mid paced drumming that sounds ritualistic at times in a shamanic sense, while the bass playing is mixed down low in the mix and has a dark sound that follows the riffs that are coming out of the guitars, as for the synths when they are used they bring an esoteric ambient vibe to the music.

Rhythm guitars are mostly black metal riffs that range from slow, mid paced and fast with some dark primitive melodies being used at times, and there are little to no lead guitars present on this recording.

Vocals range from deep growls, black metal screams and shamanistic chanting while the lyrics cover Sumerian, Egyptian, and Tibetan occultism, as for the production it has a very professional but still raw sound to it that keeps the music very primitive.

In my opinion this is another good album and fans of raw occult sounding black metal will enjoy this album. RECOMMENDED TRACKS INCLUDE "Ceremonies To Take Away Thy Ageless" "Guardians Of Gateways To Outer Void" "Incantation Of He Who Sleeps" and "Those That Wander Admist The Stars". RECOMMENDED BUY.

Posted by OccultBlackMetal at 6:23 PM