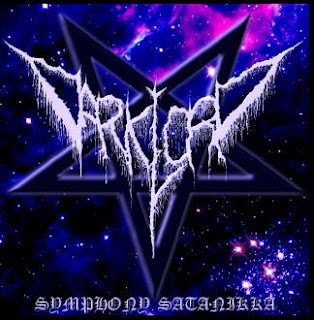 Darklord where a band from Australia that played a very atmospheric form of satanic black metal and this is a review of their 2001 album "Symphony Satanikka" which was released by Modern Invasion Records.

Drums range from mid paced to fast drumming with a lot of brutal blast beats, while the keyboards are very dark and atmospheric, as for the bass playing it has a very dark tone which is kind of mixed down low in the mix with riffs that follow the riffing that is coming out of the guitars and at times they sound very powerful.

Rhythm guitars range from mid paced to fast raw black metal riffs that are also very heavily influenced by death metal, while the lead guitars are very skilled chaotic and melodic guitar leads, as for the acoustic guitars when they are utilized briefly they use finger picking to bring a darker dimension to the music.

Vocals are a mixture of high pitched black metal screams and deep death metal growls with some occasional horror film samples, while the lyrics touch on Satanism, Necromancy, Demonology and Anti-Christian themes, a s for the production it has a very dark, raw and heavy sound to it.

In my opinion Darklord where a very good atmospheric satanic black metal band with a death metal edge, and if you are a fan of this style, you should check out this band. RECOMMENDED TRACKS INCLUDE "Infernal Necromancy" "Our Father Who Art In Hell" "Crush The Holy Priest" and "I Summon Thee". RECOMMENDED BUY.

https://www.metal-archives.com/bands/Darklord/3000
Posted by OccultBlackMetal at 12:25 AM