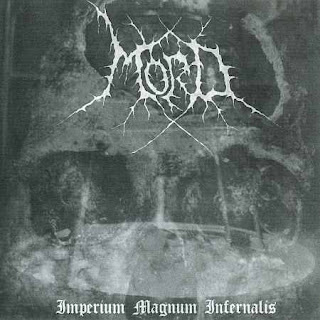 Mord not to be confused with the Norwegian/Polish black metal band I reviewed a couple of years back are a band from The United States with one member being from the Netherlands that consist of members of Satanic Funeral and Xasthur that played a very raw and depressive form of satanic/occult black metal and this is a review of their 2006 album "Imperium Magnum Infernalis" which was released by Non Compos Mentis.

Drum programming ranges from slow, mid paced to fast beats with some blast beats being thrown in at times, while the synths which are mixed down low in the mix bring a very atmospheric and depressive sound to the music, as for the bass playing it has a very dark tone with riffs that follow the riffing that is coming out of the guitars and at times they sound very powerful.

Rhythm guitars range from slow to mid paced raw and primitive sounding depressive black metal riffs that are very dark sounding with a brief use of clean playing and there are little to no guitar solos or leads present on the recording.

Vocals are all high pitched depressive black metal screams mixed in with some deep demonic growls, while the lyrics cover satanic rites, occultism, death, damnation and goat worship, as for the production it has a very dark, raw and primitive sound to it.

In my opinion Mord are a very great raw, primitive and depressive sounding satanic/occult black metal band and if you are a fan of this style, you should check out this band. RECOMMENDED TRACKS INCLUDE "Necrobestiality=Goatworship" and "In Nomine Sathanas". RECOMMENDED BUY.

https://www.metal-archives.com/bands/Mord/16505
Posted by OccultBlackMetal at 4:43 PM