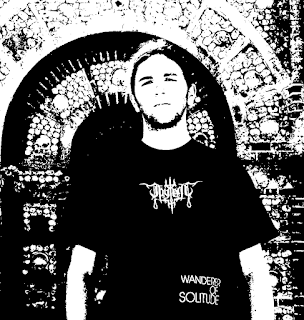 1. Can you tell us a little bit about the band for those that have
never heard you before?
Ravenfrost is a one man black metal project from Germany. I started
it in the winter of 2006. I had the dream to create my own songs for
some years and it was 2006 that I got the necessary equipment.
So far things are going well, my first demo is out and sells pretty
good and I'm working on a new cd for Victory By Fire Records.

2. How would you describe your musical sound?
It's definitely not limited to one genre. It's a mixture of black
metal, ambient and a little bit of doom and old school death metal.
It's important for me to use different influences and getting a
special sound. That's why I also use clean guitars and some keys here
and there.

3. What is the meaning behind the band's name?
Well, the name is derived from an a role-playing game. I found it to
be perfectly fitting, because it consists of two words and combines
two meanings. The raven stands for a dark and mystical side and a
fascination for death, which is the ambient side of the music. And
frost stands for the raw and brutal element which is black metal.

4. What releases have you put out so far?
Two demos, which can only be downloaded (Demo 2007 and Promo 2009)
and one physical release which is entitled "Ein Streifzug Am Abgrund
Der Seele" (which means "a foray to the abyss of the soul"). This
demo is limited to 100 pieces and can be ordered via Gottesrache
Records. I am currently working on a new cd which will be out on
Victory By Fire Records, probably in early summer.

5. How did you get in contact with Victory By Fire Records and how
has the support been so far?
I befriended the parent label Ziekte.NL on MySpace and they told me
that they liked a song of mine. When my demo came out, I contacted
the owner. He also owns Victory By Fire which is a label exclusively
for black metal and offered me a release there. The support has been
great and he is a very nice guy. Although the label is growing fast
and has a lot of great bands, he is always open for questions and
cares about the artists. It was a good choice for the release!

6. How would you describe the lyrical content of the music?
At first it was very much about blasphemy and the denial of
christianity. That is still an important issue but as the music
evolved from raw black metal to a more complex and individual style,
the lyrics got more subtle and describe the inner abyss that we call
our soul. The new cd will be called "Schatten Der Vergänglichkeit"
(shadows of vanity) and will be dealing with loneliness, emptiness
and the fear of death which are immanent in humanity.

7. How would you describe your musical progress over the years and
what direction do you see the music heading into on future releases?
As I said, in the beginning I just made raw black metal with some
keyboards. I'm constantly trying to create my own style of dark and
sickening art and push the boundaries of ambient black metal. So, the
future direction will be ambient black metal with a lot of influences
always trying to create a special atmosphere of darkness.

8. Do you have any other projects besides this band and if so who are
they and what kind of music do they play?
I also play guitar in a melodic death metal band called Megaera.
There is also a german black metal band with that name but there is
no connection to them. Death metal is one of my favorite musical
influences and we play a lot of great live gigs which is not possible
with Ravenfrost (at least not yet).

9. What are some bands or music styles that have influenced your
music and what are you listening to nowadays?
Bands who have influenced me are Marduk, Carpathian Forest, Burzum,
Striborg and lots of others. I also listen to a lot of Shining,
Limbonic Art, old Bethlehem and Xasthur.

10. Out of all the releases that you have put out so far which one
are you the most satisfied with?
I am most satisfied with the current demo although I think that the
next one will be even better because the recording is more
professional and the songs are more complex.

11. I know with some of your songs they are in German and you have
some songs in English, which language do you prefer to sing or write
in?
I write the most songs in English and also get ideas from english
lyrics or books. But German can sound very harsh and evil and
sometimes you can only express things in your mother tongue.
But generally I prefer English although I chose a german title again
for the next release.

12. Does Paganism, Satanism, or Occultism play any role in the music?
Well, I think it's wrong to devote oneself completly to one popular
belief. I'm influenced by anti-christian views and personally think
that Christianity is complete bullshit because it is based on false
moralility and believing in some invisible being without any evidence
is nothing that an intelligent person should do. But I have my own
point of views and like some ideas of modern Satanism. Occultism does
not matter to me. And Paganism...well, there are interesting pagan
cultures but you should not follow any so called Gods, so I do not
want to believe in any god, no matter what he is called.

13. How has your music been received so far by black metal fans
worldwide?
Pretty well. My first physical release has been out for 3 months now
and I think there is a growing number of listeners. I try to get more
and more attention for Ravenfrost. I am currently searching for
labels for a release outside of Europe, like in the U.S. or maybe
Asia.

14. I have read somewhere that the band is Anti Nazi but I can hear
some Burzum in the music, are you a fan of his music and not his
political views or is it just a coincidence that you have some
similarities?
This is an important issue. I am against any forms of racism and
think that politics do not belong in music. I also do not befriend
NSBM-bands and do not support any label that is into right-wing black
metal.
I think Vikernes can be considered as the father of one man black
metal bands. He created some amazing songs and had so much influence
on the developement of so called ambient black metal. "Filosofem" is
one of the greates albums ever, if you ask me!
I am definitely not a fan of the political views he later had. Being
a racist is something for stupid people who are willing to follow a
stupid ideology someone else has created. And that can never fit to
black metal. The point is that I don't think he was that way when he
created albums like Filosofem and even if he was, he never had any
political lyrics. That's what matters to me. I would never listen to
black metal with racist lyrics, even if the music was great (in most
cases the music is uninspired crap anyways).

15. What are some of your interests outside of music?
Some of my other interests are reading, especially about philosophy,
good movies and of course spending time with my girlfriend who
inspires me and supports Ravenfrost whenever she can. But my life is
pretty much all about metal, hehe.

16. Any final words or thoughts?
Support your local Black Metal Underground. Get my demo on my
homepage and watch out for the new cd. Ravenfrost has just started to
spread the plague! Thanks for the interview and the review!

Posted by OccultBlackMetal at 9:54 AM