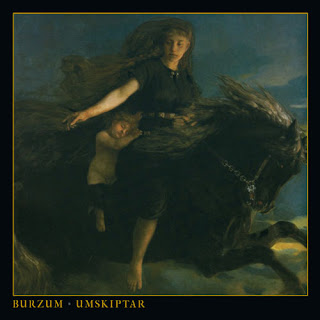 Burzum are a 1 man band from Norway that is a very well known name in metal with the new album being a concept album about the Nordic creation of the world while retaining the black metal style that was presented on the last 2 recordings while being more experimental and this is a review of their 2012 album "Umskiptar" which was released by Candlelight Records.

Drums range from slow to mid paced drumming with not much in the way of fast playing or blast beats, while the bass playing sounds more stronger on this release then their previous recordings with some heavy riffing that dominates throughout the recording, as for the synths when they are utilized they bring a very dark avant garde edge to the music but are used very rarely with most of the music focusing on guitars.

Rhythm guitars range from slow to mid paced black metal riffs with a good amount of dark sounding melodies being thrown into the music as well as some more traditional metal influences along with a brief use of clean playing on a few songs in addition the songs are very long will still having some shorter songs and there are little to no guitar solos or leads present on this recording, as for the acoustic guitars when they are utilized they use full chords and finger picking which brings a folk rock feeling to the music.

Vocals range from spoken word parts, high pitched black metal screams that lack the power of the earlier releases except for maybe a few parts and some clean singing, while the lyrics are written in Norwegian and cover the creation of the world and its end as dictated to Odin, as for the production it has a very dark, raw and primitive sound.

In my opinion this is another great recording from Burzum and while people are going to have mixed reactions due to the fact that it is more experimental than previous releases i still feel this is a great album and I would recommended it to fans of more experimental black metal. RECOMMENDED TRACKS INCLUDE "Bloostokkinn" "Alfandanz" "Valgaldr" and "Gullaldr". RECOMMENDED BUY.

Posted by OccultBlackMetal at 7:59 PM