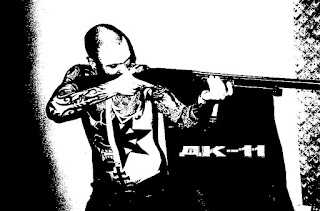 1. Can you give us an update on what is going on with the project these days?


Reloading all weapons & preparing for the second demo/E.P. assault. Nearly 2 tracks down, one of which titled- 'Once upon a time in Europa' will be uploaded in the coming days.

2. How would you describe the musical sound that is presented on the demo?


Triumphant Black War Metal. I aim to write music that is uplifting & victorious in sound, giving the conquering 'you can run but you can't hide' kind of feeling. Unlike some Black Metal with a 'negative' or suicidal atmosphere, AK-11 is about killing your opponent rather then yourself. The War Gods have been summoned...

3. What are some of the lyrical topics and subjects you explore with the new release?


Man is a warrior by nature & as humans we will always want to kill & conquer one another. So, inspired by the great battles of past & present, the lyrics are about a violent & diabolical war journey- where the enemies of the 'Left Hand Path' are relentlessly hunted down & massacred without mercy. It's about eradicating alien dogma & all slaves of organized religion from your homeland, by any means necessary.

4. I have noticed some of the lyrics where written in Russia, what is it that interests about this language to write songs in it?


I have Russian roots. Apart from its vast, harsh landscape & climate, Russia has a brutal  history. So I find it's a fitting language to sing in this aggressive style of Black Metal music, (especially after some shots of vodka).

5. What is the meaning and inspiration behind the projects name?


The AK-11 name stands for Avtomat Kalashnikov-11. I wanted a project named after a weapon & after many different options ie (names of bayonets, tanks, Neutron bombs), I went with the Russian AK-47 assault rifle. The project began in April 2011-hence the 11.

6. Currently there is only 1 member, are you planning on expanding the line up in the future or do you choose to remain solo?


You know, I like being in charge & enjoy working solo. I always agree with myself & never argue. But sometime in the future when I wish to perform in front of an audience, I will require the aid of other 'Heathens'. I have seen live solo acts with some disastrous consequences & I do not recommend it to anyone playing metal. Besides drum programming can only be entertaining to a certain point.

7. Currently you are unsigned are you looking for a label and if so what kind of label do you feel that would be a perfect fit for your music?


I have not looked for one as yet & these days a band can do quite a lot without one. However there are some great labels with awesome bands out there that I will look into.

8. On a worldwide level how has the feedback been to your music by fans of black and war metal?


Much better then expected. I had some pretty good demo reviews so far, so I know I'm on the right (Left Hand) path.You can check some of them out on my blog -
http://ak-11.blogspot.com/p/reviews.html.


After all these years, the early 90's Scandinavian metal bands still do it for me. Of course there are the 80's black/thrash classics & gems which have an influence on AK-11 as well. Also in my collection you will find a variety of different 'dark music' genres :Neo-folk, Industrial, Punk/Gothic, Electronic. Growing up we always had plenty of Classical music in the house & I have been into metal since forever. But it was not until I discovered the second wave of Black Metal that I was truly 'possessed' by music.

11. How would you describe your views on Paganism, Occultism and Satanism?

For me personally the Satanic/Occult philosophy means rebellion against religious authority & the deluded, brain-washed society / superficial world in which we live in. It can be very empowering psychologically (if not spiritually) if used in the right way.


Doing some fitness training in the morning & then having a good time with all forms of alcohol in the evening.


'Legendary, Demonic & Invincible' is AK-11's first release. So for those that like their metal black, written under the influence of vodka & inspired by Siberia's frozen wastelands, Tundra wolves & blood soaked battles, can download the demo for free at
http://ak-11.blogspot.com/
Thank you for your time & HAILZ.
Posted by OccultBlackMetal at 12:57 PM