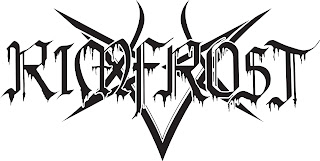 Hravn: Hi Occult Black Metal!! Rimfrost is now working hard on getting out the word of the new upcoming album, together with the releasing label Non Serviam Records. We are also active searching for gigs. Two coming up in Sweden within a couple of months. Then the aim is to get to Germany. For the moment we are rehearsing the live set but both me and Throllv has started composing new material for the next recording. The machine won´t rest this time!

2.You have a new album coming out at the end of March,how would you describe the musical sound that is presented on the recording and how does it differ from the stuff you have released in the past?

Throllv: I would like to start to say hello people!
This album is probably the most brutal sounding record we have ever done, as it is beautiful, epic and artistic. I’m very proud of it. It differs from our previous releases in many ways. We have written much better songs this time, we have really worked hard with the overall sound and the band has developed a lot during our 13 years of existence.


3.This is the first album to be released in 7 years, can you tell us a little bit about the gap in between releases?

Hravn: Hey, I would like to know myself! Hahaha! No, the main thing has been problems with finding the right labels to work with, as well as the economic parts. Album recording isn´t free unfortunately. Some private matters as well, the music hasn´t been unhold from our side, even though it seemed like that for the audience. We have worked in our dungeon. Hahaha!

Hravn: I would say that, as the writer of most of the lyrics, I am taking my writing outside the BM-box more and more. I try to keep the theme of course, but also variate it. “Dark Prophecies” for example, that is an almost pure “King Diamond” way of writing a story (my thoughts though). With the twisted end in that song. Hehehe. I like to explore the different ways of doing things and I am open for new ways to work, I think it will keep the interest both for me as a composer and our fans.

Throllv: Our stage performance is very energetic and playful. The music is like a fat kick in your face. It’s very entertaining I promise you. Go and see us live, you won’t be disappointed!

Throllv: Yes, we have some clubs in Sweden so far and we are hoping to get to some big festivals next year. Connect with us on Facebook and you won’t miss a thing!

7.The new album is going to released on 'Non Serviam Records, can you tell us a little bit more about this label?

Hravn: Basicly NSR is one of the “real” labels still active. They work close with the bands and the dedication is at an high level. They even search for gigs and involves the bands in it, not many labels do that anymore. I personally think that NSR will grow fast the coming years, so have your eyes on them!

Throllv: Hard to say if our fans are fans of black metal or not. So I have no idea if black metal fans in general likes us or not. Haven’t heard anything about it.

Hravn: Rimfrost will always have one leg in the BM-scene and the other standing in the thrash/heavy metal zone. The third leg does other kinds of jobs. Hahaha! I couldn´t resist….
Seriously, both me and Throllv are very big fans of classic heavy metal such as Accept and Judas Priest, so don´t be surprised to hear influences from that camp!

10.What are some of the bands or musical styles that have had an influence on your newer music and also what are you listening to nowadays?

Hravn: Everything that has soul in it. But heavy metal is ALWAYS running in my presence. My house god is Udo Dirkschneider!! When it comes to BM Bathory is and will always still be the king!

11.Does Paganism play any role in your music?

Hravn: Yes. It is our roots and it reflects in our music. “Veraldar Nagli” were a pure Viking theme record. I will always still have that in me… I am not a believer in any form, but when I die I want to party in Valhalla and have a fight with the Norse gods for fun. He he! Who wants heaven or hell when you can eat Särimner and have mjöd?!

Hravn: Thank you for your questions! Support Rimfrost and we´ll see you out there!!!

Throllv: Thank you and don’t forget to check up the freezing, destroying and crushing machine RIMFROST. If you’re not scared to get knocked out that is. Then you should not check it out! 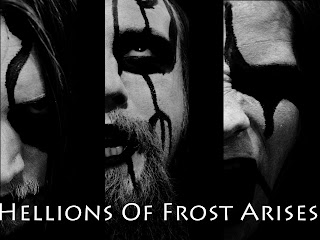 Posted by OccultBlackMetal at 4:57 PM