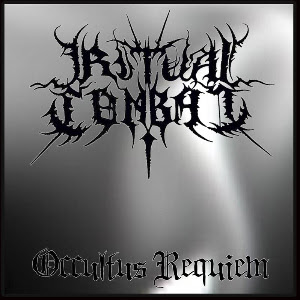 Ritual Combat are a band from Los Angeles, California that consists of ex members from Nokturne that plays a very fast and brutal form of black/war metal and this is a review of their 2010 album Occultus Requiem" which was released by Hate War Records.

Drums are fast throughout the album with a lot of brutal blast beats and some mid paced drumming, while the bass has a very dark and distorted tone and there is a mixture of mid paced and fast riffs.

Rhythm guitars are mostly fast black/war metal riffs with some mid paced riffing and one song using depressing sounding riffs mixed in with some parts of certain songs that has some death metal influences added in and there are little to no lead guitars present on this recording.

Vocals are high pitched black metal screams with some spoken word parts, while the lyrics touch on occultism and war with a satanic edge, as for the production on this album which was recorded at Black Static Studios in 2009 has a very raw and heavy feel that captures all of the sounds coming out of the musical instruments.

In my opinion Ritual Combat are a very good band that would appeal to all fans of true black/war metal. RECOMMENDED TRACKS INCLUDE "Infernal Wolfpack" "Circle Of Nine" and "Black Mirror Eternity". RECOMMENDED BUY.