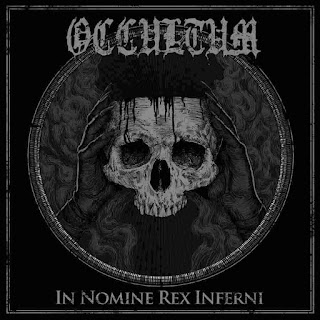 Drums  start  off  the  album  along  with  some  distorted  reverb  going  into  a  very  fast  and  raw  musical  direction  which  also  uses  a  great  amount  of  tremolo  picking  and  blast  beats  while  bestial  growls  can  also  be  heard  briefly  with  the  vocals  being  mostly  angry  sounding  black  metal  screams.

Occultum  creates  another  recording  that  remains  true  to  the  satanic  style  of  black  metal  that  was  established  on  the  previous  release,  the  production  sounds  very  raw  and  heavy  while  the  lyrics  cover  Satanism,  Occultism  and  Necromancy  themes.

https://oldtemple.bandcamp.com/album/occultum-in-nomine-rex-inferni
Posted by OccultBlackMetal at 8:47 PM