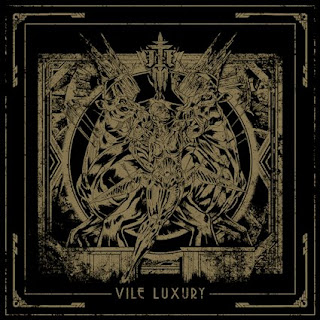 New  York's  Imperial  Triumphant  have  returned  with  a  new  recording  which  continues  the  experimental  and  progressive  style  of  black  metal  from  previous  releases  and  this  is  a  review  of  their  2018  album  "Vile  Luxury"  which  was  released  by  Gilead  Media.

On  this  recording  Imperial  Triumphant  expand  on  their  avant  garde  and  experimental  style  of  black  metal  by  taking  it  into  new  directions  and  also  bringing  in  elements  of  death  metal,  the  production  sounds  very  professional  while  the  lyrics  cover futurism,  philosophy  and  decay  themes.

https://metalinjection.net/av/song-premiere/imperial-triumphant-expel-bewildering-madness-on-gotham-luxe-with-help-from-artificial-brain-vocalist-will
Posted by OccultBlackMetal at 4:52 PM