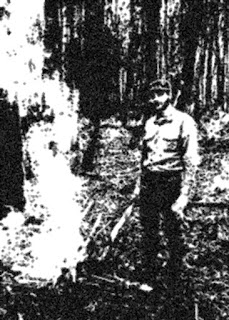 The project is something I started after I realised that I wanted to keep my Black Metal endeavours seperate from my Neo-Folk and experimental stuff,
after I had made that decision this album as well as another as of yet unreleased album came very spontaneously and quickly. People seemed to like the themes and ideas, so here I am.
The project is romantic over anything, a way to express my love for this island fortress that I am bound to.


2.You have your first full length coming out at the end of July what was the sound you where going for on this recording and also do you feel you achieved it?

I really can't say whether there even was a sound I had in mind, the album was recorded in a week in my downtime between working. I'd stop working at 4PM and by 7PM I'd have a finished song, after a few days I had an album. It was an "oh shit" moment,
I really liked what I had created and decided I wanted to do something a bit different with the themes/imagery of the project. As far as sound goes I think in the end it
ended up being fairly traditional Nordic Black Metal with some quirks that will inevitably come in when it's just one mind working on it.
I can definitely hear some Deathspell Omega on a couple of tracks as well as the usual Darkthrone worship. I love atmosphere in black metal, but I am a sucker for a good riff.


3.All of your lyrics deal with Hermeticism along with the band name, can you tell us a little bit more about your interest in this Western Occult Tradition?

Sure, well I remember first hearing about Hermeticism through reading a lot of Manly P Hall and instantly feeling a connection to it. I like the idea that every religion and tradition is perennial, in a sort of Evolian sense.
I get that from Hermeticism because the doctrine is very affirmative and stringent that knowledge has been passed from the divine to man. I find the prospect of an individuals spiritual journey from within being only guided by divine intervention and not so much a strict set of axioms one must live by.
My interest in Hermeticism is purely from an interpretive stand point. I like to take the aspects of Hermeticism that I like and relate it to my own North-western European history.
In saying that, there is a lot to learn from the teachings. This makes sense, as in the reign of Elizabeth I in England the Occult and Hermeticism played a huge role in what became the spiritual leige of England at that time.
In fact Elizabeths personal Astrologer was a hermeticist and also is responsible for translating the works of Euclid into English, greatly advancing the work of English Mathematicians at the time.
I feel a strong connection between the Hermetic tradition and England. Hence the project name.

4.You also have yourself down as a representitive of the Aryan Hermetic Order, can you tell us a little bit more about it and also how does the Aryan Philosophy fit in with Hermeticism is seen by most people of being of an Egyptian origina?

Well the Aryan Hermetic Order is a collective of Musicians from England that I have connection to, mostly Black Metal and Ambient. I guess you could say its a "circle" whatever that is.
And The Aryan part comes in because I see a relation between the Atlantean origins of the Aryans and the Egyptian origins of the red hair found in the British isles. hence "Aryan Hermetic" because the idea is a fusion of the hermetic traditions and the racial aspect with the native Pagan spirituality of the British isles and England. The egyptian origins of the tradition make it no less dinstinctly European in my eyes.
Considering the genetic makeup of the Egyptian aristocracy at the time.
It is also possible to relate nearly all Egyptian gods and godesses to the Nordic pagan gods as well as the gods of the East and the Celtic gods. We are one and the same in my eyes, united by blood as Europeans but united in spirit by our traditions.

5.You also talk of a red haired Egyptian aristocracy, do you also have an interest in the Aryan origins of such cultures of the Indian, Persian and Summerian races?

Yes, as I have already mentioned I have a huge interest in this. I am a big fan of the Perrenial philosophers and traditionalists such as Evola and Guenon.
As well as being English I am also of Norwegian descent too, and so I do feel a strong pull to the Hyperborean ideal and of Atlantis and of the origins of the Aryan races and how they contributed to what we could call Indo-European Paganism.
I should say that this interest is removed from the NSDAP though,
AH is not an NS project and it never will be. Not because I don't have sympathies for that ideology, but simple because that is not how I identify nowadays.

6.On your facebook page you also talk about the Roman and Nordic tradtions, do you feel a lot of what these ancient traditions wear teaching in the past got lost over the years when Europe got Chrisitianized?

Yes, I think a heck of a lot was lost in that time. A lot of it unsalvagable. Especially with regards to the Eastern european paganism and Celtic traditions. What you are referring to is a quote from Evolas "Pagan Imperialism", one of his first works and one of my favourites of his. I like the idea of Europe under a unified spirituality, and I think this is needed in order to overcome the dark times ahead of us. In saying that I am a lot less anti Christian than a lot of Black Metal artists, its not my spirituality of choice, but I can find sympathies with Catholics from for example Hungary. I just wish that the Christians weren't so destructive in their conversion of especially Northern Europe. I have memories
of a time that England was nothing but a mighty Oak forest, vast and natural. I long for this time again, thats all I ask. And I do believe that my descendants will live in this environment once again, we just need to awaken it within ourselves. It takes time. As Varg likes to say "We must starve the beast, not try to fight it"


7.Can you tell us a little bit more about the artwork that is presented on the new album cover?

It is a painting by Ludwig Carl Wilhelm Fahrenkrog, I'm not entirely sure what its depicting in terms of the characters involved, but the full image appears to me like a divine offering,
A Man of warrior nobility standing at the foot of a divine being granting him a display of power. It is a Germanic Pagan depiction, removed from the Hermetic side of the project, but no less relevant.
the Fylfot on the beings belt signifying the universal truth.

8.On the album you recorded everything by yourself, would you be open to working with other musicians if they shared the same visions that you have?

I have no problem working with other musicians, and I have done frequently in the past for previous projects. The main reason I didnt have any
contributors here is because I had no reason to, I usually only ask for guest musicians if they can do something better than I can on a recording.

9.On a wordrldwide level how has the reaction been to your music by fans of black metal?

Honestly I have no idea, people seem to like it though at some level. I mainly just like it a lot myself and I sent it to some close friends that also enjoyed it, and that was enough for me to have confidence in the project.
It's a cliché to say I don't care what people think, because I do hope people like it. But it doesn't bother me overly.

Well I have another AH album completed, In style it is a lot more out there than this upcoming first album. It's still very much a Black Metal album but it takes chances, put it that way. Im really happy with everything
Ive done for AH so far and i'm feeling very spiritually satisfied by this art and I will continue to create in this way for this project I imagine. In saying that I am moving to Norway soon and my living conditions will likely not allow for much recording, and so
after this second AH is eventually released I doubt there will be much from the project or my other projects for a while.

I've had a pretty huge musical journey over the years. I mostly started with Post-Punk, and I still listen to that occassionally. I don't think that influences much of the black metal but its still something I enjoy.
As for what I currently listen to its mostly all Black Metal and Neo-Folk. Those styles just seem to satisfy me in ways nothing else can. To name specific artists I have been obsessed with the Dutch band Faceless Entity for a while now
Specifically "In Via Ad Nusquam". They create a uniquely harrowing atmosphere on that album and I cannot get enough of it. Also some of the Bosnian stuff I like a lot. Especially Void Prayer/Cave Ritual. I love the LLN so anyone trying to recreate that sound is a tick in my book.
And then as far as Neo-Folk goes I almost always have Death in June, Fire + Ice or Forseti playing.

I'd just like to say thanks for showing an interest in the project. It means a lot. I am proud to represent Britain and England by making Black Metal Noise with pride,
and I do hope that more artists come to realise that this beautiful island is the home to some amazing black metal and some of northern Europes most inspirational landscapes.