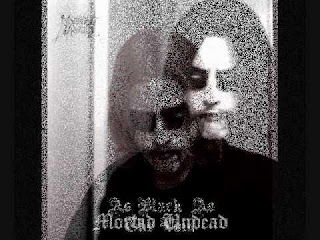 1. For those that are not familiar with your project, can you gives us a brief history of the band?
It all started in 2009 after spending about a year in isolation just listening to various Black Metal bands and projects on a daily basis. I started to experiment with mixing programs on my Laptop and began recording some material. I started to experiment with different styles of Black Metal vocals and practiced until I got it right. I decided to utilize my newly learned skills and create a solo project similar to Xasthur of Alhambra. On Youtube, I discovered Nino of Black Plague whom I showed my As Black As the Void demo to. So we formed a partnership and ever since I got motivated to spread the word to various Black Metal people on the Internet about Morbid Undead.

2. Where did you come up with the name Morbid Undead?
I always admired Dead from Mayhem, and knew about his Blackened Death Metal / Thrash project before he joined Mayhem called Morbid. The original idea I had for Morbid Undead was to create a similar project to Dead's Morbid, but at the last minute decided to go for a more Depressive approach in the vein of Xasthur after discovering a natural talent I had for writing depressive music and performing depressive dissonant style vocals. The "Undead" part comes from the fact that I'm fascinated with zombies, corpses, and death. With these deep emotions, I actually feel like I'm Undead myself. So with the both of these notions I came up with Morbid Undead.

3. How would you describe your musical sound?
I would describe it as being a reflection of my own emotional thoughts and lifestyle. The music I create and the lyrics I write reflect my own mental suffering. I'm pretty much self isolated, lonely, and I suffer from depression and the feeling of despair almost on a daily basis. I had hoped to achieve a sound similar to what projects such as Xasthur and Nortt have done, and I can safely say I have done that quite well to say the least.

4. Do you have any other projects that you participate in?
Not at the moment, but I've had many different ideas for new side projects that I would like to create possibly in the near future. Though I have decided not to give out any more information regarding side projects until I've actually created some physical material first. Though I will be working and doing a split with other projects very soon, Black Plague from Torrance being one of them.

5. I noticed when I listen to your music I hear no electric guitars, are there any plans in the future to start utilizing this instrument on songs?
I originally wanted to add guitars to my project but decided not to as it was too complicated for me to add onto the mix along with the keyboards. I also felt like the "rough" guitar samples I recorded drowned out the synthesizer instruments so i decided to just keep it strictly keyboards and synthesizers. When I listened to my first synthesizer-only recording of As Black As the Void I felt it sounded better without guitars anyway so I decided to just stick with that approach. I of course added drums from a drum program to make it sound at least a bit more Metal. The Bass guitar weren't so much of a problem as the standard guitars since they're very minimal anyway. As for adding electric guitars in the near future, not unless I hire a session musician with more experience and better recording equipment.

6. How has your music been received so far by black metal and ambient fans?
It has been perceived very well so far, but occasionally I get someone who feels it is necessary to tell me something rude or to offer me bad advice, which is very few though. Other than that I can safely say that majority of the people who have heard of my music whether they prefer Black Metal or Dark Ambient more so over the other enjoy my music quite a lot. A close personal friend of mine even went as far as saying that I should consider recording music for horror movies, someone else even said that some of my songs are among the top 8 best Ambient Black Metal project songs around.

7. What are some bands or music styles that have influenced your music?
My primary influences are Xasthur, Nortt, Letum, Lustmord, Endless Dismal Moan, and Black Funeral. Though I credit anything that captivates the feeling of despair, isolation, nihilism, and depressive emotional thoughts as an influence to my music. I enjoy both Black Metal and Dark Ambient music, so anything that crosses those two realms are heavy influences.

8. What are you listening to nowadays?
Since my primary passion and influence is Black Metal, I mostly listen to bands like Gorgoroth, Emperor, Mayhem, Burzum, etc. But since most of my influences are Depressive Black Metal / Ambient, I listen to a lot of Xasthur, Nortt, Endless Dismal Moan, etc. I often occasionally listen to underground Death Metal and Speed/Thrash Metal as well, even sometimes classic rock/heavy metal like Black Sabbath, Led Zeppelin, Dio, AC/DC, and so on. I'm also open to a lot of Dark Ambient bands/projects too.

9. What role does Satanism or Occultism play in the music?
As much as I'm fascinated with the Occult and Satanism, none. My songs and the lyrics mainly focus on Nihilism, Misanthropic Projection, Suicide, Despair, Isolation, etc. Though I am strongly opposed to Christianity, and religion based on Christianity as a whole. I'm not sure if Morbid Undead will ever turn it's focus to a more Satanic theme in the near future or not, but as of right now it remains as it is until further notice. I know for sure if I decide to start another side project though, it will be focused entirely on the Occult, Satanism and Anti-Christian blasphemy.

10. What are some of your interests outside of music (i.e films, literature etc.)?
Before getting involved in music I was a hardcore video game player, I spent most of my days playing video games alone or over the Internet against other players when I had a Sony Playstation 3. I got bored of the same old mindless shooting games and generic gameplay/storylines so I turned my interests solely towards music instead. I still occasionally play video games, but not as often as my youth days. To put it quite simple, I got bored.

11. What direction do you see Morbid Undead going into on future releases?
My next so called release will be a split with Black Plague, after that I can't really say. I might create a compilation CD of As Black As the Void with Bells of Suicide and a few other newly recorded tracks but after that I can't really say. Perhaps by mid or late 2010-early 2011 I'll record and release a full length album, before hand maybe getting a record label if I desire to get signed onto one. Though I was planning to keep my music commercial-free, as I despise commercialism in Black Metal.

12. Any final words or thoughts?
The Morbid Undead / Black Plague split will be done sometime around 2010 according to Nino of Black Plague (hopefully) if all goes well. I'd like to thank you for giving me this wonderful interview, and look forward to speaking with you or doing another interview sometime again in the near future. Thanks.

https://www.spirit-of-metal.com/en/band/Morbid_Undead
Posted by OccultBlackMetal at 2:02 PM